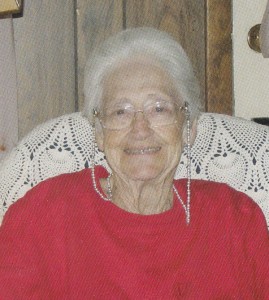 Mary E. Kliewer, age 92, of Strafford, MO, passed away Tuesday, February 3, 2015 in her home. She was born December 6, 1922, in Bloomington, WI, to Peter and Laura Duve. Mary had worked at Cox South Hospital, retiring after 18 years. She was preceded in death by her husband; George, two sons; George Leroy and Donald Ray Kliewer. She is survived by her children; Laurita Kliewer Renee Woznicki, Michael Kliewer and his wife; Darlene, Jeffery Kliewer and his wife; Ronda, Darrell Kliewer and hs wife; Becky, and sister Betty Rudolph, 8-grandchildren and 11-great-grandchildren.
Gracveside services will be held at 11:00 a.m., Saturday, February 7, 2015, at White Chapel Cemetery Springfield. Visitation will be held from 6 to 8 p.m. on Friday, February 6, 2015 at Greenlawn Funeral Home North. Services have been entrusted to Greenlawn Funeral Home North, Springfield, MO. Online condolences may be made at www.greenlawnfuneralhome.com.