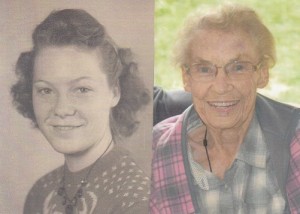 Mary Elizabeth “Betty” (Upchurch) Kiser was born on April 28, 1930 to Eldridge Harmon and Mary Jane (Bliss) Upchurch in Springfield, Missouri. She was saved and baptized at the Presbyterian Church on High Street and graduated from Springfield (now Central) High School in 1948. She married her husband of 42 years, Perry Lee Kiser, on June 19, 1948. In 2016 Betty joined her spiritual family in heaven on May 28, the same day that her husband died in 1990. She was in her home surrounded by family at the time of her death.
She was preceded in death by her husband, Perry Lee Kiser and her son, Randy A. Kiser. She was also preceded in death by her parents; her sisters, Katherine Wallace, Hazel Marks, and Dixie Young; and her brothers, Junior, Buster, and Sam Upchurch.
She is survived by her children, Perry Gene Kiser (Debbie) and Susie Kiser Pointer (Robert), all of Maumelle, Arkansas, and her daughters, Lori Kiser Lansdown (Albert) and Lisa Kiser Dyer (Andy), all of the Springfield area. She is survived by six grandchildren: Jennifer Kiser, Kristy Kiser Russell, Kelly Jones, Rob Pointer, Maddie Dyer, and Hailey Dyer. Great grandchildren surviving her include Alyssa Kiser, Ashlyn Russell, Sophie Jones, Molly Pointer, and Holden Pointer. She is also survived by a host of good people in both the Kiser and Upchurch families as well as numerous friends. The family would like to acknowledge her group of special “girl”friends: Elizabeth Medley, her daughter, Cyndi, Beth Highley, Chris Pendergrass, Pat Sullins, and all of her friends at the Kearney and Glenstone Walmart from which she retired. The family sincerely appreciates Kayla, Arlene, and Deanna, her caregivers from Oxford Hospice.
Betty Kiser began her life as a traditional woman for her time, graduating from high school and immediately getting married. She and her husband raised their five children in a modest two-bedroom one-bathroom home on the northwest side of town. Her family and extended family were the center of her life. At the age of 50 Betty became a non-traditional woman for her time. She learned to drive for the first time and went to work outside the home for the first time, beginning by working for her good friends at the Little Boutique Gift Shop on Park Central Mall. She then worked at Walmart for over 20 years, retiring in November 2015 at the age of 85.

She had a life-long love of all animals, beginning with her young life on a farm and her special horse. She would help any animal in distress and over the years had a number of birds, cats, and dogs. Her two elderly dogs, Mikey and Scruffy, were with her on her bed when she died. Betty liked to read, do crossword puzzles, and play computer games. She liked to travel, providing a special week on the beach at Miramar Beach, Florida for her children, grandchildren, and great-grandchildren. She loved gambling for fun, be it Las Vegas, Miami Oklahoma, Hot Springs Arkansas or Tunica Mississippi. Of course she was lucky!
Family and friends are invited to visitation at Greenlawn Funeral Home North from 5:00-7:00 pm on Tuesday, May 31.
Services will be held at 10:00 am on Wednesday, June 1 at Greenlawn Funeral Home North. Interment will follow at the cemetery.

GOD BLESS TO ALL MOTHERS AND ALL THAT THEY DO!