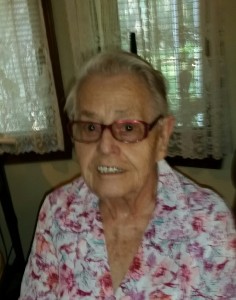 Mary Jane Brown, born September 6, 1925 in Chinook, Montana, went to her heavenly home March 31, 2016. She was born to Homer and Bessie (Neilson) Holland. Mary was the youngest of five children, Charles Holland, Bernice Payne, Beth Ripley and Edith Scott, all who preceded her in death as well as her parents, and a special nephew Roger Melton. Mary was united in marriage to Dewey H. Brown on September 10, 1946. To this union were born three sons, Terry Brown, Springfield, Dale (Jane) Brown, Springfield and Gail (Beth) Brown of Tennessee all who survive her. Also surviving her is seven grandchildren and fifteen great-grandchildren and many other family members, friends and neighbors. Mary was a lifetime member of Immanuel Baptist Church of Springfield, Missouri.
Graveside services for Mary will be on Saturday, April 2, 2016 at 11:00 am in Highlandville Cemetery, Highlandville, Missouri. In lieu of flowers, donations are requested go to St. Jude’s Children’s Research Hospital.