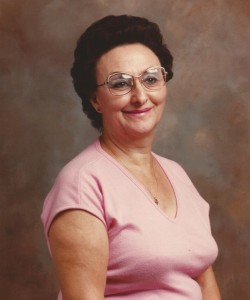 Mary “Maggie” Magdalene Stroud Oxenreider, age 80, died January 16, 2016, in her home, Lowell, Arkansas. Mary was born on August 8, 1935 in Northview, Missouri to Meritt Stroud and Florence Criger Stroud.
She is survived by her children, 1 daughter, Elaine and her husband, Jim Keithley of Afton, Oklahoma, 2 sons, Jerry Lambert of Daisy, Oklahoma and Danny McCracken and wife, Amelia of Rogers, Arkansas, 11 grandchildren, 21 great-grandchildren and 2 great-great-grandchildren,1 step daughter, Vicky McCracken of Springfield, Missouri, 4 step sons: David McCracken and wife, Cindy of Yantis, Texas, Michael Oxenreider of Springfield, Missouri, Timmy Oxenreider and wife Lauralea, and Jerry Oxenreider, of Pleasant Hope, Missouri, and step daughter-in-law Susan Oxenreider of Strafford, Missouri, 9 step grandchildren, and 2 step great grandchildren.
She is preceded in death by her parents, 4 sisters, 2 brothers, 2 great-grandchildren and her husband of almost 21 years, Jerry Oxenreider. She was a great mom, who for many years raised her three children alone. She later married Jerry Oxenreider who was the love of her life. She will be greatly missed by all who knew her.
She received her GED and then graduated from Cox Nursing School. She worked 18 years as a nurse and then cared for the elderly in their home and vaious other jobs until retiring in 1996.
Mary attended the Northview Baptist Church and later attended the Atlantic Street Baptist, in her final years she attended the Pentecostals of NWA in Rogers, Arkansas.
Graveside services will be Saturday, January 23, 2016, at 2:00 p.m. in Welch Cemetery, in Northview, Missouri. No public visitation is planed. xThe family would like to thank the Circle of Life Hospice of Benton County, Arkansas for all their care during Mary’s illness. Donations can be made to Circle of Life Hospice in Benton County, Arkansas, or to the VFW in Springfield, MIssouri