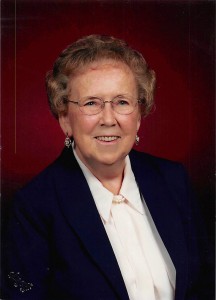 Pauline (Williams) Haney of Willard, Missouri passed away on Sunday, March 20, 2016. She was
born on July 19, 1923 to George and Trinkie (Cartee) Williams. Polly spent her early years in Linn Creek,
Missouri and graduated from Linn Creek High School. She was married to the love of her life, Joe Haney,
in 1943 while Joe was serving in the United States Navy. They moved to Springfield, Missouri in the early
1950’s and then to Willard, Missouri a few years later. She was a homemaker while her children were
young and then worked for a number of years in the book ordering department at (Southwest) Missouri
State University library.
Polly was preceded in death by her parents, George and Trinkie Williams; brothers Norris Williams and
his wife Ruby; Lowell Williams and his wife Elsie; Dewey Williams and his wife Elizabeth; Raymond and
Gene and sister, Icel Pope and her husband Tom.
Polly is survived by her husband of 72 years, Joe Haney; daughter, Paula Vinson and her husband Rick of
Springfield, MO; son, Ken Haney and wife Shirley of Tomball, TX and daughter, Terri Wagner of North
Topsail Beach, NC; 7 grandchildren and 12 great grandchildren. Services for Polly will be at 11:00 AM,
Saturday, March 26, 2016 at Greenlawn South Funeral Home, Springfield, Missouri with graveside
services to follow at White Chapel Cemetery. Visitation will be from 9:30 AM to 11:00 AM, Saturday,
March 26, 2016 preceding the service.
Polly was a dedicated Christian and a long?time member of Broadway United Methodist Church where
she also served as choir director for many years. She was a loving, kind and gentle person who will be
greatly missed by her loving husband, children, grandchildren, great grandchildren, nieces and nephews
as well as her many friends.