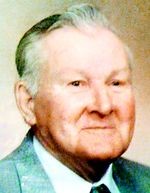 Melvin Edward Rousey passed away in his home on December 9 after a long illness with his family by his side. Melvin was born on January 20, 1922 in Wapella, Ill. He was the son of James and Barbara (Swearingen) Rousey. He is preceded in death by his first wife, Shirley (Foote), his son Donald, daughter Mary Ann, six brothers and seven sisters. He is survived by his wife of 48 years, Patricia, and his children, Nova Evans and her husband Steve, David Edward, Nancy Highfill and her husband Mike, Lisa Woodbridge and her husband Howard, Tammy Lehman and her husband Mark, Jeff Rousey and his wife Jeni, Sheila Savage and her husband David, Chris Rousey, Susan Knee and her husband Jack, Anna Rousey, and Angela Sullivan; 26 grandchildren and six great-grandchildren. Also surviving is his sister, Nova of Ill and step-daughter Shirley (Foote) Webb and many nieces and nephews. Melvin served in the United States Navy during World War II and earned several medals and awards. He worked over 50 years as a self-employed contractor. He was a member of the United Pentecostal Church for over 40 years. He was a well-respected man and had many friends and never met a stranger. Under the direction of Greenlawn Funeral Home North, visitation will be held Sunday from 3 p.m. to 5 p.m., December 13 and the funeral on Monday, December 14 at 3 p.m. Burial will be at Greenlawn Memorial Gardens.