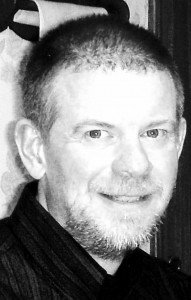 Michael Bruce Ewing, age 53, of Springfield, MO, passed away Saturday afternoon, May 16, 2015, after a battle with brain cancer over the past 13 months. He was born in Kirksville, MO, October 7, 1961, to Arthur Winston Ewing and Alice Joan (Pursley) Ewing. He was a devoted son, brother and uncle.
Mike graduated from West Plains High School in 1980. He earned a Bachelor of Science Degree in Accounting from Southwest Missouri State University in 1984. Mike worked several years in Health Care, but devoted the last eight to taking care of Dad and Mom full-time.
Mike is preceded in death by his father. He is survived by his mother; one brother, Jon Ewing and his wife Coyeatte; one niece, Erica Ewing; one nephew, Briley Ewing; one aunt, Ruth Pursley, all of Springfield, Missouri, and several cousins. The family would like to thank Mercy Clinic, Mercy Hospital, Mercy Villa Nursing Home and their many staff members who cared for Mike. Services have been entrusted to Greenlawn Funeral Home South.
Graveside services will be conducted Saturday, May 23, 2015, 10:00 a.m., at the Morrisville Cemetery in Morrisville, Missouri.

The cemetery is located
about 0.4 miles north of Morrisville. DIRECTIONS: From the Post
Office in Morrisville, go north Farm Road S. 111, 0.2 miles to Farm
Road E. 527. Go right on Farm Road 527 and the cemetery is on your
right.