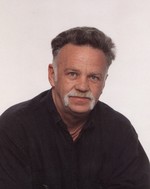 Mr. Michael Kershner, age 55, of Dunnegan, MO, passed away Friday August 28, 2009, in his home, following a lengthy illness. He was born December 9, 1953, in Independence, MO, to William James and Rosalea (Whitman) Kershner. He is a very kind loving man, who loved to go fishing, garden, and his birds. He was a very good grandpa “Papa Mike” who loved his grandchildren dearly.
His sister Linda Darlene Kershner; and a son James Ryan Kershner precede him in death.
He is survived by his life partner Barbara of the home; a son Christin Kershner of Dardanelle, AR; his parents Jim and Rosalea Kershner of Dunnegan, MO; the mother of his children Patti Kershner of Dardanelle, AR; three brothers: Kyle Kershner and Steve Kershner and his wife Deann all of Colton, CA, and Bobby and his wife Bobbi Kershner of Paola, KS; two sisters: Roberta Bly of Bolivar, MO, and Diane Pelton of CA; seven grandchildren: Rachel, Jesse, Christopher, Kamryn, Kynlea, Misty, and Alicia; as well as many other family and friends.
Funeral services will be held at 10:00 AM Tuesday, September 1, 2009 in Pitts Chapel with Bro. Rick Owsley officiating. Burial will held in the Greenwood Cemetery Bolivar. Friends and family may call at their own convenience Monday between 1:00 & 8:00 PM. Friends and family may sign a guest book or send private condolences at: www.greenlawnfuneralhome.com. Arrangements have been entrusted to Pitts Chapel of Greenlawn Funeral Homes Bolivar, MO.