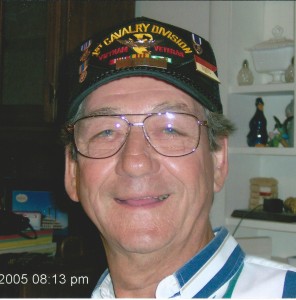 Funeral services for Mickey Anthony Parent age 76 of Ridgedale, Missouri will be held at 12:00, noon, Wednesday, January 6, 2016 at Greenlawn Funeral Home North in Springfield with Pastor Terry Kendrick officiating. Burial with military honors will follow in the Missouri Veterans Cemetery in Springfield under the direction of Greenlawn Funeral Homes.
He passed away on December 30, 2015 at his home.
He was born on January 24, 1939 in Springfield, Missouri the son of Beverly A. and Pauline Rogers Parent. Mickey served his country in the U. S. Army during the Viet Nam War with 1/9 Cav “A” troop. He was wounded on March 30, 1966 while extracting troops from a hot LZ. The medals he is most proud of are: the Army Aviator Badge; 7 Air Medals, (one with a V device for valor) and the Distinguished Flying Cross. He is also the recipient of the Purple Heart for wounds sustained in Combat. Mickey retired as a parking lot supervisor for Silver Dollar City. He enjoyed fishing, hunting and golfing.
Survivors are his wife: Shirley Baumgartner Parent of the home in Ridgedale, Mo
Four children; Pamela Kallsen, Deborah Moore, Michael Parent and Michelle Guillory all of Lake Charles, Louisiana. Two brothers, Tony Parent and Randy Parent both of Springfield, Missouri. Nine grandchildren and several great grandchildren and a good friend, Dusta Cook of Ridgedale, Mo. He was preceded in death by his parents and a daughter, Sharon Ann Parent.
Visitation will be at 6:00 until 8:00 pm, Tuesday, January 5, 2016 at Greenlawn Funeral Home North in Springfield, Missouri.