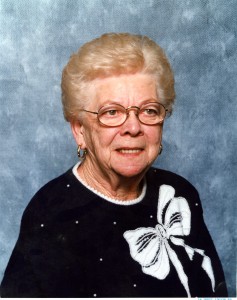 Mildred was born on the family farm in Brookville Township, near Morgan MN on 21 September 1915 to Minnie (Johnson) and Willard Douglas Gilland. She was one of eight children: Marvin, Art, Hazel, John, Walter, Mike, Howard and Joyce. All of them have preceded her in death except her sister Joyce, the youngest, who resides in Lake Crystal, MN. Mildred grew up in the Morgan, MN area. She worked on the family farm and graduated from Morgan High School in 1934. She learned to drive at age 13 in a 1929 Model A Ford, which had a rumble seat. When her brother John commented on how well she did crossing the wooden bridge, Mildred replied that she just closed her eyes until she was on the other side of the bridge…. She also taught her mother how to drive, who promptly ran the car into the ditch. She has interesting stories of life on the farm. One time a bull got loose and chased her across the farm clear up to the house. During the prohibition cars would stop at the wooden bridge, turn off the engine and lights, and men would go under the bridge. She and her brother sneaked down there and found jugs of liquor under the bridge. They poured the liquor into the creek and filled the jugs back up with water. She often told the story of her brothers emptying left over homemade beer into the pig trough. My, how they laughed as the drunken pigs later staggered, and could not make their way through the doorway back into the barn. One calamity of her life was a car wreck in 1945, in which her leg was severely damaged. Maurice argued and would not let the doctors amputate. Though she has had some difficulties over the years, that damaged leg lasted her entire life. She attended the Mankato Commercial College in 1934 (now Minnesota State University). She walked to school in the cold Minnesota winter, and one time she got frostbite on her legs crossing the bridge over the Minnesota River. She was also trained in Cosmetology. On March 12, 1937 Mildred married her high school sweetheart Maurice William Robinson, who preceded her in death on 5 May 1980, after 48 years of marriage. Maurice and Mildred had five children: Don (wife Janetta) of N. Vernon, IN), Gary (wife Betty) of Lebanon MO, Jim (wife Sandi) of Lebanon, Keven (wife Stephanie), and Mali Stafford (husband Kyle) of Springfield, MO. Mildred is survived by 11 grandchildren, 29 great-grandchildren, and five great-great grandchildren. In their early years of marriage they farmed in Hector MN. Their home had wooden boards for a floor. Mildred said corn would sometimes grow up inside the house in the dirt between the boards. They also lived in Redwood Falls and then in Walnut Grove, MN. Maurice became an auctioneer, and they owned and operated an auctioneering sales pavilion and raised horses. Mildred was a tireless worker as she maintained business operations since Maurice traveled much in support of the sales pavilion.Among the various places they lived was a farm, with horses, in Belleview MO, and they owned and operated a truck stop and restaurant in Rolla MO. In 1971 they moved to Springfield MO where they had various businesses. Mildred was always a supportive wife and partner to Maurice in all of their various moves and business ventures. She had a quick mind and was very astute in business affairs. Mildred and Maurice led an active life, and both loved to dance, especially the Polkas. For many years in the 1950s Mildred carefully watched after her aging mother; perhaps these acts of love and service to her contributed to Mildred’s long life, by honoring her mother, as spoken of in the scriptures. She also joked with the young people that she lived long because she grew up on organic food from the farm. She then laughs when they comment how expensive that organic food must have been. Mildred has always been a quick wit, making conversation enjoyable. The family and medical personnel in these waning years have been impressed with her remarkable memory and humor. Few perhaps have loved and cherished her children as Mildred has, and she provided significant motherly protection and care. Family has been the center of her life, and her home has been the place for family gatherings for decades. She always asked, “Do you have to go??” “Stay a little longer.” “ When will you be back??” Mildred was an excellent piano player, and also played the accordion and had her own organ. She had exquisite penmanship. She liked to read and has spent time in the scriptures while she was able. Over the years she made periodic visits to other women of her Church, particularly some of those confined to homes, even though she was often older than many of them she served. In 1977 both Maurice and Mildred became members of The Church of Jesus Christ of Latter-day Saints. The following year he received the Priesthood and was ordained to the office of Elder. In 1978 they were married for Time and Eternity and Sealed in the Provo UT Temple. This ordinance provided an opportunity for them to be man and wife forever if they would keep their covenants with God. For a number of years she attended the temple fairly often, being sure temple ordinances were performed for their parents and various family members. It has been lonely for her since the death of her eternal companion, Maurice, in 1980. At times Mildred expressed her desire to pass through the veil in order to be with him. She finally got her wish, and has now moved on into the next phase of her life, seeking the fulfillment of the eternal promises given by the Father and his Son Jesus Christ. Mildred will be laid to rest at the Greenlawn Cemetery in Springfield, MO.
Any who wish may contribute to Regional Hospice, 1328 E Evergreen St, Springfield, MO 65803.