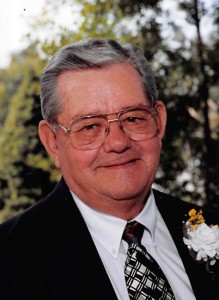 Millard Fon “Bud” Marlin, 88, left to be with his Lord June 2, 2015 while living at the Veterans Nursing Home in Mt. Vernon. During his last days both friends and family surrounded him. Family was important to Bud and his joy was in seeing his children, grandchildren and great grandchildren grow, compete in sports and experience life. His friends were plentiful and they saw Bud as always willing to help, a joke teller, a golf competitor and a source of wisdom to both young and old.

At age 17 he entered the Navy serving on the USS Colorado as Seaman First Class performing the duties of lookout during WWII. His ship was in all of the major campaigns in the South Pacific while defeating the Japanese. After leaving the Navy he studied to be a welder and got a job with Trailmobile, which had a tank production plant in Springfield. He spent 25 years working his way from line production to field repairs and eventually into service center management. The knowledge he gained helped him start his own business Trux Trailer and Tractor Repair in 1976 where he eventually retired to play golf everyday. His career in the trucking business led his family from Springfield to Dallas to Houston to Kansas City to Milwaukee and back to Springfield in a short 10 years.

His personal accomplishments ranged from a fast pitch softball player, a Boy Scout leader, Country Music lover and he even had his own band, an avid golfer competing in countless tournaments, domestic and international traveler including trips to Alaska, Europe and Australia. He was a restorer of old cars and especially proud of his TR3 that he paraded with the Shriner’s and a life long Cardinals fan and Drury basketball supporter. With Lena they were winners of the yard of the month year after year. In 2000 he took the honor flight with his son to visit the completed WWII memorial.

The family would like to thank all of Bud’s caregivers in the last few years of life including Magnolia Nursing Home, The Veterans Nursing Home and Compassus Hospice.

Visitation will be at Greenlawn East, 3540 East Seminole (next to Catholic HS) from 6:00 to 8:00 pm Friday June 5th and Funeral Services will be at the same location Saturday June 6th at 11:00 am. Burial will be in Greenlawn Memorial Gardens, Springfield, MO.