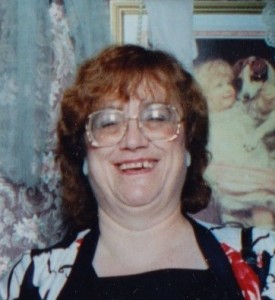 Minna Matthews, 71, of Ozark, passed away on Thursday, February 12, 2015, in her home at Nixa Nursing and Rehab in Nixa, MO.
As a young nurse in Germany, Minna fell in love with an American soldier and started a new life in the states. She proudly stood heads above everyone else at her citizenship ceremony, and spent the following decades raising her very tall family across Springfield and Ozark with a brief stint in California. Minna spent most of her career working as a meat wrapper for Ramey’s/PriceCutter in Springfield, Nixa, Ozark, and Republic. She revisited her nursing roots by getting her CNA license while working at Ozark nursing homes for a few years, which gave her empathy for the many wonderful people who care for her at Nixa Nursing and Rehab.
Minna was preceded in death by her parents, Wilhelm and Minna (Guckes) Lendle; two siblings, Rainier and Ursula; and her ex-husband Kenneth Matthews.
She is survived by three children, Ruth Jones and husband Mark of St. James, MO, Asa Matthews and wife Elizabeth, of Ft. Worth, TX, and Monika Matthews, of San Francisco, CA; four grandchildren, Kirk Jones, Katrina Williams, Kenny Matthews, and Stefanie Matthews; 8 great-grandchildren; two brothers, Wilhelm Lendle and Richard Lendle, a sister, Irene Lendle, all of Erbenheim, Germany, a sister, Gisela King, of Holly, MI; her loving companion, Harold (Andy) Andrews; and numerous nieces, nephews, cousins, and many friends.
Visitation will be on Friday evening, February 20, 2015 between the hours of 5 and 7 P.M. with funeral services to be held at 1 P.M., Saturday, February 21, at Greenlawn Funeral Home North, Springfield.
In honor of Minna’s deep commitment to caring for animals, donations may be made in her memory to C.A.R.E. Animal Rescue (417) 581-5008.