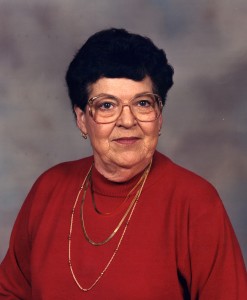 Funeral services for Nadine Youngblood age 86 of Branson, Missouri will be held at 2:00 PM, Tuesday, October 6, 2015 at Greenlawn Funeral Home in Branson with burial to follow in the Cedar Valley Cemetery at Hollister.
She passed away October 2, 2015 at Point Lookout Nursing & Rehab in Hollister, Mo.
She was born July 25, 1929 in Springdale, Arkansas the daughter of Orville and Alta Howerton Griggs. She was a homemaker and did many years of volunteer work at one of the local nursing homes which she enjoyed. Nadine was a member of the Church of the Harvest in Branson, Missouri.
Survivors are her two children; Leanne Youngblood of Hollister, Missouri, and Steve Youngblood (Renee) of Branson, Missouri, two sisters, Judith Ann Youngblood (Max) and Janice Watkins both of Rio Linda, California, one brother, Donald Griggs (Shirley) of Coos Bay, Oregon. Seven grandchildren, nine Great grandchildren and one great geat grandchild. She was preceded in death by her husband, Bueford Youngblood, one son, Dennis Youngblood, two sisters, Doris Smith and Joyce Colvard.
Visitation will be from 6:00 until 8:00 PM, Monday in Greenlawn Funeral Home in Branson.