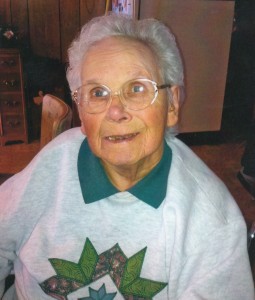 Nellie was born September 10, 1920, in Willard Mo
She is preceded in death by her parents, Mary (May) and Robert McCrosky, 3 brothers; Robert, Loren, and Tom McCrosky, and husbands; Thomas Potter, Bud Potter, and Jim Kane.
She is survived by one sister; Dazel Thomas of Fair Grove, three daughters; Connie Potter of Strafford, Carol Sexton of Springfield and Karen Medley of Bois d Arc, 3 grandchildren; Amanda Sexton of Springfield, Bryan Green of Strafford and Jason Sweargin of Springfield, and 12 grandchildren and 1 great grandchild.
Nellie was a member of the Eastern Star, the VFW women’s auxiliary, and a member of the Fair Grove United Methodist Church.
Nellie worked in her early years as a baby sitter housekeeper, at a dime store, and as a waitress at the Missouri Grill where she met her husband Tom Potter. After she married she was a house wife and stay at home mother. In later years she helped raise her 2 grandsons, Bryan and Jason.
Nellie enjoyed canning, growing flowers and sewing. She also enjoyed dancing and country music. She and her husband Jimmy had a flea market booth that she embroidered and crocheted towels to sell in their booth. She and Jimmy also enjoyed going to the Strafford Senior Center everyday for lunch, and they were regulars every week for Bingo at the VFW. They put lots of miles on the car because they loved to get out and go places. Her family has many fond memories of her. She was a very good cook. Her favorite holiday was Thanksgiving, and she always had a big dinner every year for her family. She would start cooking in the wee hours and cook all morning. She always woke her daughters and grandsons up every morning for school by putting they socks on their feet, and then fixed them a hot, homemade breakfast like coffee cake right out of the oven. She always fixed them 3 meals a day and the family would gather around the dining table every night for a nice meal with a homemade desert. She was always the home room mother at her daughters school every year and made treats for their class mates. She went to all her grandson Bryan’s Basketball and Baseball games, and she taught her grandson Jason how to slow dance and do the two-step.
The person Nellie most admired was her sister Dazel. They talked on the phone every day for years. She also talked to her daughters on the phone every evening to catch up on their day.
She was also fearless. She went to her daughter Karen’s house and killed a snake for her one evening when it got in her house.
She was a hard worker and mowed and weed-eated her lawn well into her 80’s.
Her granddaughter Amanda was one of her caregivers over the last 6 years along with her daughters and her favorite niece Juanita. Amanda remembers one of her grandmother’s sayings when she used to tell her grandmother that her hands were cold. Nellie would always say cold hands, warm heart.
Nellie was a very loving and caring person and will be greatly missed by her family.
Funeral services for Nellie will be Monday, August 24, 2015, 1:00pm, at Greenlawn Funeral Home North. There will be no visitation. Interment will be in Dishman Cemetery following the service.