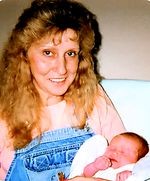 Norma Jean Hilburn-Tatum
Norma Jean Hilburn-Tatum Norma Jean Hilburn-Tatum was born the 6th of November, 1959, and departed from this life on the 31st of August, 2009, after a long and courageous battle with pancreatic cancer. She was preceded in death by her parents, Anna and Warren G.; and older sister, Darlene. She is survived by her long-time boyfriend and the love of her life, Manuel Jackson Harris; her three children, Jason Christopher, Richard Wayne III and Jessie Lea, who gave Norma her first and only grandchild, Thomas Suel Beattie Dunn; sister Arlene; brothers, Paul, Johnny and Tony; her friend and uncle, Dude; Barbara Ann among many other cousins; and her lifelong friend from the neighborhood, Karen Sue. Norma had numerous friends from her life’s path and work experiences. She was the Operations Manager for Springfield Public Schools, where she proudly served since 1989. She gave her all living and breathing for the best interest of this district, and she loved every one of you. To list all those whose lives were touched and made better by hers would be impossible. We can simply say that we were stronger by having had her in our lives as her mere presence liberated us. The strongest woman we shall ever know passed away this week, may we honor and do her proud. Visitation will be held in Greenlawn Funeral Home North on Friday, from 6 to 8 p.m. Funeral services will be Saturday, beginning at 1 p.m., in the funeral home, with burial following in Belview Cemetery.