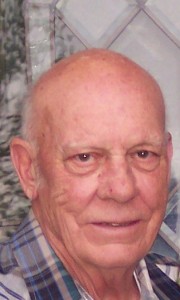 Olan Kenneth Yokum, “Pappy” as known by many, passed away Monday, November 30, 2015, at the age of 83 in his home in Rockaway Beach, Mo.
Olan was born July 26, 1932, at Mill Creek, WV, the son of the late Frank Kenneth Yokum and the late Virginia Agnes Rosencrance. Olan joined the Air Force on February 7, 1951, served his country during the Korean War and was discharged December 9, 1954. After discharge, Olan attended West Virginia University and graduated January 1959 with B.S. degrees in Forestry and Wildlife Management.
On June 21, 1959 he married his wife of 56 years, Colleen Rose Dill Yokum. They moved to the west coast, where Olan worked in both Washington and Oregon National Forest Districts. During his career with the U.S. Forest Service, he moved to various parts of the country. He served in Missouri as District Ranger of the Mark Twain National Forest in Cassville, Potosi and Winona, retiring in May 1987.
Olan was an avid outdoorsman, hunter, fisherman and trapper. He was a member of the Missouri and National Trappers Association, and inducted into the Missouri Trapper’s Hall of Fame in 2003. Hunting turkeys was a favorite pastime along with fishing for brook trout and large steelhead.
Olan was a devoted husband and father and will be greatly missed. Surviving Olan is his wife Colleen of Rockaway Beach, MO; two daughters, Debra Yokum of Springfield, MO, and Connie Yokum of Little Elm, TX; a sister, Phyllis Daniels of Beverly, WV.
Olan was proceeded in death by his parents Frank Kenneth Yokum and Virginia Agnes Rosencrance Yokum.
The family would like to express their sincere gratitude to the members of Mercy Hospice of Springfield, MO.
Visitation will begin at 11:00 AM at the Greenlawn Funeral Home, Branson MO with services at 1:00 PM on Thursday, December 3, 2015 with Pastor Larry Lawman officiating. Interment will follow at Ozarks Memorial Park. Donations may be made in Olan’s name to Mercy Hospice of Springfield, MO.