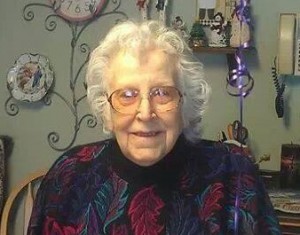 Mrs. Opal Madeline York, 91, of Springfield, MO went to be with her Lord and Savior on October 18th, 2015. She served alongside her husband Francis Olen York as pastor’s wife in Iowa for many years and later as Sunday School teachers with her husband at the Seminole Baptist Temple in Springfield, MO. She and Olen married on January 10, 1947 in Iowa and enjoyed 63 years together before his passing in February of 2010.
Opal was born in Davis County, near Bloomfield, Iowa on January 8, 1924 to Francis Marion Stogdill and Martha Jane Bowman Stogdill. She is survived by her sons, Gary Francis York of Nixa, MO, Ronald Olen York and wife Glenda York of Highlandville, MO, daughters, Marla Jean Fields and husband Paul David Fields, missionaries in Paraguay, South America, and Deborah York Brown of Springfield, MO. Opal is survived by 8 grandchildren, and 16 great grandchildren.
In addition to her parents, she is preceded in death by sisters Alta Larue Graves and her husband Jacob David Graves, Helen Lanorah Smothers and her husband William Max Smothers, Edith Alvena Middleton and her husband Archie Middleton, Eula Pauline Parsons and her husband Lavern Parsons, along with two infant brothers Floyd Raymond and Joseph Pearl Stogdill. Surviving are one sister and brother, Hazel Marie Shively (husband Ronald Shively, deceased) of Bloomfield, IA, and Verlin Francis Stogdill and wife Barbara Stogdill who reside in Michigan.
Visitation will be Friday the 23rd from 6-8pm in Greenlawn South, Springfield, MO. The funeral service will take place Saturday at 1pm in the Seminole Baptist Temple. Graveside service will be at Greenlawn North cemetery following the celebration of Opal’s life. In lieu of flowers a memorial may be given to Seminole Baptist Temple’s missions program.