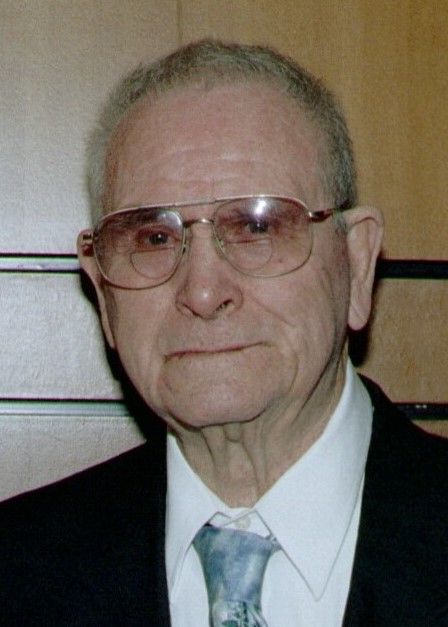 Services with full military honors will be at a later date.

Orville Leonard (Smokey) Choate was born on November 8, 1925 in Pleasant Hope, Missouri to Ruth Pearl (Allen) Choate and Thomas Leonard Choate.  He had two brothers, Edward and Paul, and two sisters, Catherine (Choate) Cromer and Golda (Choate) Scott.  His family moved to the Portland, Oregon area for a few years before returning to and settling in the Springfield area.  One of his childhood homes was near the railroad tracks, and Smokey sometimes told about jumping off a foot bridge onto a moving train, but riding a little too far out of town before his father was summoned to come and retrieve him!  Smokey loved ice skating and spent many hours in the rink at Dowling Park where he met his first wife Dorothy.  They were married briefly before Smokey joined the Marine Corps to fight in World War II, but later divorced.  Smokey was stationed in the South Pacific during WWII and received his first Purple Heart for injuries received in a firefight.  After the war, he separated from the service for about 6 months.  He soon realized that the Marines were his calling, and re-enlisted.  During his career, Smokey also saw combat action in Korea where he received his second Purple Heart after being wounded in another firefight.

Smokey was married to Ramona Arlene Horn on December 11, 1954 while stationed in Albany, GA.  His first son, Orville Choate, Jr was born there in 1955.  In 1957, a second son, Donald was born.  A daughter, Romona Kay was born in 1962 after the family moved to Carlsbad California.

Smokey continued to serve and was ordered to the Gulf of Mexico during the Cuban Missile Crisis.  Other combat engagements included two tours of duty in Vietnam.  A third son, Joseph was born in 1965 in Carlsbad, California.  During Smokey’s first tour in Vietnam in 1966, his daughter Romona was hit by a car and succumbed to her injuries while living in Springfield.   Other duty included 3 peacekeeping cruises.

While Smokey was stationed in Camp Jejune North Carolina, his oldest son entered the Boy Scouts, and Smokey became very active as an adult volunteer.  He was made an assistant District Commissioner.  The Marines had set aside a wilderness area for the Boy Scouts aboard the base and assigned Smokey to oversee that area as the Base Scouting Coordinator.  An office was constructed on the campgrounds and Smokey served in that position for over two years until his retirement.  He was awarded two scouting keys and several other awards for his service to the Boy Scouts of America.

During his career, Smokey was promoted several times, and retired at the rank of Gunnery Sergeant (E-7).  He was also awarded many combat ribbons and citations.  He and his family settled in the Springfield area.  Smokey worked for the State of Missouri as a guard for the 1107 AVCRAD unit in Springfield, and retired from that in 1991.  Arlene died in 1999.

Smokey met Shirley Jean Reed and after a courtship, they were married on June 23, 2002 in Springfield, Missouri.  Their marriage ended when Shirley died in October 2008.  Smokey remained single thereafter.

As he aged, his need for care increased and he was admitted to the Missouri Veteran’s Home in Mt. Vernon, Missouri in December, 2014.  Smokey loved the home and the other veterans who shared many experiences that were common among them.  He volunteered for several needs at the home and one of the duties was to provide an honor escort to veterans who went before him.  He was asked by many of the veterans to provide escort as they departed the home.  He did so gladly and earnestly.  Smokey loved his family and his country.  He was proud of his career as a United States Marine, and that his name was prominently displayed on the range board as a top shooter on base nearly every time he qualified.  He was also proud of the time he devoted to the Boy Scouts of America and the skills he was able to pass to the scouts.  He loved fishing and the occasional hunt.  He confessed Jesus Christ as his Lord and Savior.

Smokey died on April 18, 2020 at the age of 94.  He was active until the morning of his death, and his health faded rapidly that afternoon.  Smokey has moved on to a new duty station, possibly as an NCO guard at Heaven’s gates as the Marine Corps Hymn suggests.

Smokey was preceded in death by his wife and the mother of his children, Ramona Arlene, his daughter Romona Kay, his mother, Ruth and his father, Thomas, his brother Edward, his sister Catherine, his sister Golda and his last wife Shirley.

He is survived by his son, Orville and Orville’s wife Sue, his son Donald and Donald’s wife Clara, his son Joseph and Joseph’s wife Nonie, by 9 grandchildren 15 great grandchildren and by many nieces and nephews.

Interment will be at National Cemetery in Springfield, MO.  Simper Fi Gunny, we got it from here. Ooh-Rah!

Services with full military honors will be at a later date.