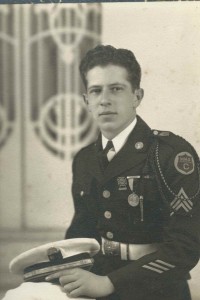 Oscar Huning “Jack”Jacobsmeyer Jr. passed away June 13, 2015. He was born February 16, 1922 In St. Louis, MIssouri to Oscar Huning Jacobsmeyer Sr. and Laura Toelle Jacobsmeyer. He graduated from Missouri Military Academy and served in the Army/Airforce as a bomber Crew Chief in WWII. Jack lived in St. Louis and Branson, Missouri, working as a small businessman and volunteering extensively for the Lion’s Club. He is preceded in death by his parents, two brothers, Roland and Milton Jacobsmeyer and his wife, Ginny Jacobsmeyer. He is survived by his daughter, Nancy Eisele, son-in-law, Sandy Eisele, step daughters, Gerry Boden (Brench), and Donna Asbury, and many grandchildren and great grandchildren. Our gratitude to Presbyterian Village and Arkansas Hospice for their compassion and kindness. Funeral arrangements will be made by Greenlawn Funeral Home, Branson, Missouri. A memorial service will be held at a later date. In lieu of flowers, donations may be made to Presbyterian Village, Little Rock, Arkansas and Arkansas Hospice, North Little Rock, Arkansas.