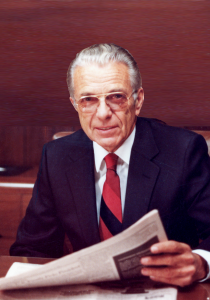 Paul Mueller, 99, passed away peacefully at his home in Springfield, Missouri on January 19, 2015. Paul was born in Denver, Colorado on August 7, 1915. He was the son of the late Reuben George Mueller and the late Hazel Pumphrey Mueller. Paul’s sister, Madeline Browne, predeceased him. Paul and his family moved to Springfield in 1930. He was a 1934 graduate of Springfield Senior High School, where his personal yearbook quotation read, “He digs worms out of sod. Then he fishes with a casting rod.” He had a lifelong love of nature and the outdoors, especially his farm near Strafford.
In 1938 he married Frances Nadine Parker who preceded him in death. He is survived by seven children, Judy Wickersham, Springfield; Kathleen Moore and husband David, Kansas City; Molly Morgan, Rolla, and the late Joseph Morgan; Larry Mueller, Springfield; Jeanie Morris and husband John, Springfield; Mindy Scovell and husband Jim, Mission Hills, Kansas; Lynn Lacy and husband Mark, Denver, Colorado. Also surviving are grandchildren, Paul Wickersham (Sharon); Karen Wickersham; Amy Hill; David Moore (Catherine); Andrew Moore (Laura); Matthew Morgan (Amy); Brian Morgan (Kathryn); Christopher Mueller; Abbie Mueller; Julie Spruill (Jack); Jennifer Snyder (Luke); John Paul Morris; Megan Morris; Kristin McGill (Jesse); Kylie Brewer (John) and Parker Lacy. Also surviving are great grandchildren, Austin Hill, Paige Hill, Jordan Hill, Claire Moore, Ellen Moore, Rachel Moore, Audrey Moore, William Moore, Charles Moore, Maddie Morgan, Brandt Morgan, Ella Morgan, Evan Morgan, Henry Morgan, Olive Snyder, Annie Brewer and Quigley Brewer. Grandson, Ryan Scovell, predeceased him. He is also survived by a niece, Charlene Smith (James), San Antonio, Texas.
Paul’s early employment was with the Springfield Gas and Electric Company in the field of drafting and engineering. He developed an interest in the emerging field of refrigeration and air conditioning. In 1940, at the age of 25, he entered into a partnership with Gordon Mann to form Mann and Mueller Heating and Sheet Metal located on Olive Street. Poor health forced Mann to sell his interest to Mueller in 1943. The business was renamed Paul Mueller Company. During the 1940s the company expanded from heating and air conditioning into food processing equipment, beginning a tradition of technical innovation that eventually resulted in numerous patents issued to the company and its employees. Mr. Mueller developed many of these valuable patents personally.
In 1946 the newly incorporated Paul Mueller Company entered the dairy equipment market. By 1950 major growth in the business prompted the move to its current location at Kansas and Phelps Streets. The company’s signature products were made of stainless steel for the dairy, wine, brewery, and biopharmaceutical industries. In 1969 the company became publicly traded.
Today Paul Mueller Company employs more than 1000 people in multiple locations in the United States and the Netherlands, manufacturing and servicing equipment sold worldwide. Co-workers remember Paul as wise, innovative, and passionately engaged in the development of their company.
Mr. Mueller was a former member of the Missouri Society of Professional Engineers, listed in Who’s Who in Commerce and Industry, member of the board of directors of the Missouri Corporation for Science and Technology, member of the Board of Trustees and President’s Advisory Council for Drury College, board member of Springfield Chamber of Commerce, member of the Springfield Board of the American Red Cross,member of the Board of Directors of Commerce Bancshares, Inc. in Kansas City, trustee of Midwest Research Institute, Kansas City. He enjoyed membership in Springreen and Hillbilly Investment Clubs and Hickory Hills Country Club. In 1998 Nadine and Paul provided funding for the Mueller Family Foundation that has provided grants to more than fifteen deserving charities during the past years.
Nadine and Paul were blessed with wonderful care from Evelyn Warren for more than twenty years. The family is grateful for the caring staff from Integrity Health and Hospice especially Karen, Minnie, and Sharon.
He leaves a profound legacy for his family and community. He was generous, modest, compassionate, inquisitive, and most of all loving and caring throughout his long and productive life. His intelligence, impeccable character, and devotion to his family will long be remembered. In lieu of flowers those wishing to make a memorial contribution may send donations to The Kitchen, 1630 North Jefferson, Springfield, MO 65803, Convoy of Hope 330 South Patterson, Springfield, MO 65802 or Ryan’s Gift of Love, 13851 West 63rd St., Box 322, Shawnee, KS 66216 where funds will be used to help special needs adults in memory of Ryan Scovell, Paul’s grandson or a charity of one’s choice.
There will be a visitation at the The Morris Conservation Center, 600 West Sunshine, 65807 from 5 to 7 p.m. on Friday, January 23. A private memorial service will be held at a later date.
Arrangements are under the direction of Greenlawn Funeral Home East.