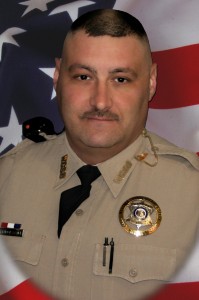 Paul Thomas Bridgewater courageously fought a three year battle with Esophageal Cancer ending on August 21st, 2015 at the age of 45. Born September 2nd, 1969, Paul dedicated his life to serving and protecting others for more than 17 years, including service as a Military Police Officer in the Army and most recently as a Sheriff’s Deputy for the Webster County Sheriff’s Office. On March 11th, 2010 Paul was awarded the State of Missouri Life Saving Ribbon for selflessly risking his life in the line of duty. One of Paul’s many passions included working as a range instructor for Webster County Sheriff’s Office. He also enjoyed spending time with family hunting and four wheeling.
Paul is survived by his wife, Gail Bridgewater; sons Cory Bridgewater, Trea Bridgewater and his wife Hannah Bridgewater; grandson Phoenix Bridgewater; parents Laney and Betty Bridgewater and his brothers, Brian and Anthony Bridgewater, and their wives Lily Noble and April Bridgewater. Paul also has many aunts, uncles, nieces, nephews and other extended family that will miss him dearly.
A memorial service for Paul T. Bridgewater will at 1:00 P.M. Wednesday, August 26, 2015 at Greenlawn Funeral Home East. Inurnment with full Military Honors will follow at Missouri Veterans Cemetery. A memorial visitation will be from 6:00 to 8:00 P.M. Tuesday, August 25, 2015 in the funeral home.