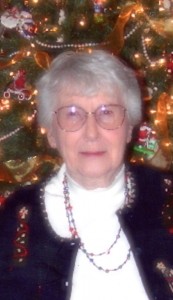 Phyllis A. (Haney) Wright passed away January 8, 2015 at Magnolia Square, Springfield, MO. Born December 12th, 1920, Phyllis grew up in Coffeyville KS., graduating from Coffeyville High School in 1938. Phyllis married Joseph R. Wright also from Coffeyville on November 5th 1939. In 1959 Joe & Phyllis moved to Shawnee, KS., where they resided until 1978, retiring to Grand Lake in Bernice, OK. They relocated to Springfield, MO. in 2003 to be closer to family. Phyllis was preceded in death by her husband, Joe, in October 2008, her father Phil Haney, mother, Edna (Lightner) Parsons, and two brothers, Bob & Jack Haney. Phyllis is survived by two sons, Steve Wright and wife Debbie, of Montgomery, TX., Joe Wright and wife Joyce of Springfield, MO. and niece Cathy Burk of Wichita, KS. Also surviving are four grandchildren, two step grandchildren, six great grandchildren and two step great grandchildren. Phyllis lived a long wonderful life, and will be missed by many.
The family would like to thank the entire staff at Magnolia Square. You are all wonderful caregivers and may God Bless you.
A visitation will be held at Greenlawn South Funeral Home, Springfield, MO. on Friday Jan. 16th, 6-8 PM. Graveside services will be on Saturday Jan. 17th, 1 PM at Fairview Cemetery in Coffeyville, KS.
In lieu of flowers, contribution may be made to the Missouri Veterans Home, 1600 S. Hickory, Mt. Vernon, MO. 65712