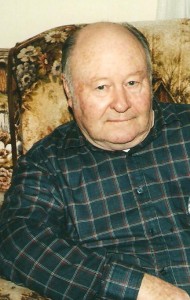 Raymond Ervin Garrison
Raymond Ervin Garrison was born on May 15, 1929 to George Raymond and Velma (Miller) Garrison in Springfield, MO. To this union, Ray was the oldest child. He was named after is dad (Raymond) and his grandpa (Ervin). He worked in construction, painting, meat processing, wheat harvesting and apple picking in the state of Washington.
Ray was a proud veteran of the United States Army. He served from January 24, 1951 to December 27, 1952. He was a Private First Class acting Corporal. He served in Germany.
In 1948, he asked Jesus to be his Lord and Savior at the College Street Baptist Church. During Ray’s illness, he continued to tell his family how much he loved them and how he didn’t go to church much but he never lost his faith and that is was what was important, “Don’t lose your faith”.
He fathered six children, Ron Graham, Debbie Burton, Robert Graham, Brenda Bryson, Michael Brixey, and Randy Randalls. He has 26 grand kids and 15 great-grand kids.
On Friday, December 12, 2014, at the age of 85, Ray went home to be with His Lord after fighting a hard battle with a bacteria in his blood.
He was preceded in death by his parents, two infant sisters; Wanda Kay Garrison and Dorthy Lee Garrison and an infant brother, two half-brothers Gene Garrison and Dan Garrison and a half-sister Maxine Simmons, four brother-in-laws Fred Hughes, Stephen Sewell, Charles Long, and Jerry Brixey, and one sister-in-law Darlene Garrison, and an infant grand-daughter Roxanne Graham.
Ray is survived by his children Ron and wife Judy, Debbie and husband Frank Burton, Robert and wife Vicki Graham, Brenda and husband Zerl Bryson, Mike and wife SherRi Brixey, Randy Randalls and his wife. He is also survived by his siblings: Norma Mae Hughes, Carroll Garrison, Georgia “Jo” Brixey, Betty and her husband Wesley Gambriel, Elizabeth “Liz” and her husband Brinkley Williams, Shirley and her husband Roy Curbow, Barbara “Barb” and her husband Kermit Holmes, Sandra “Sue” Long, George “Art” and his wife Jody Garrison, Katherine “Darlene” and her husband Max Mead, Richard “Butch” and his wife Linda Garrison, 26 grand kids, 15 great-grand kids, and many nieces and nephews.
One of Ray’s final words was, “I love you all.”
Visitation will be Wednesday, December 17, 2014 from 6:00 – 8:00 pm at Greenlawn Funeral Home North. Funeral services will be Thursday, December 18, 2014 at 12:00 pm in the funeral home. Burial will follow in Missouri Veterans Cemetery Springfield, Missouri.