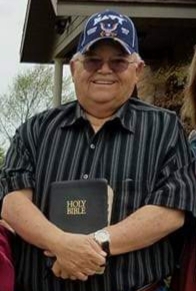 Richard A. Cowan 71, Strafford, Mo. passed away April 16, 2019, in Mercy Hospital, Springfield, Mo. after a sudden massive heart attack. He was born in Springfield, Mo. on January 10, 1948, to John and Violet Cowan. He was a retired pipe fitter for the Frisco Railroad. He was a member of the Rock Prairie Missionary Baptist Church, near Pleasant Hope, Mo. Richard was a Vietnam War Navy veteran, serving on the USS Cooke. In his spare time he enjoyed motorcycles, fishing and spending time with his family.
Richard was preceded in death by his parents, his son, Robert Moses Cowan and his adoptive parents, Clarence and Mary Cramer. He is survived by his wife, Vicki Cowan, a daughter: Michelle Schoen and her husband, Robert, a son: Michael Cowan and his wife Jennifer, four grandchildren: Kaleb, Nicholas, Victoria, and Anna Marie.
Funeral services will be at 1:00 p.m. Friday, April 19, 2019, at Rock Prairie Missionary Baptist Church, near Pleasant Hope, Mo. with burial to follow, in Rock Prairie Cemetery. Visitation will be Thursday evening from 6:00 p.m. to 8:00 p.m. at Greenlawn Funeral Home North, 3506 North National, Springfield, Mo.