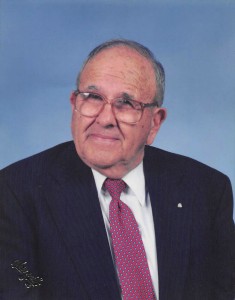 Dr. Richard Abram Boyd, 97, of Springfield passed away on Fri­day, January 15, 2016. He is survived by his wife Molly of 64 years, daughters Valerie Kill­ingsworth (Lonnie) and Kristi Brannen (Tom); nine grandchildren: Chad Killingsworth, Jody Killingsworth, Katie Kill­ingsworth Crum, Jesse Brannen, Callie Bran­nen Crosby, Clay Bran­nen, Joseph Brannen, Fred Killingsworth, & Troy Killingsworth; ten great grandchildren; two nieces, one nephew; and many cousins.
Richard describes the most influential time in his life as being his years of service in the U.S. Army. As a five year veteran in WWII, Rich­ard served in the Aleu­tians in the 203rd Artil­lery Regiment – known as the Houn’dawgs, and served as a sergeant in the Military Police in the Philippines until his hon­orable discharge in the late summer of 1945.
From here he went to Kansas State University on the GI Bill, becoming a doctor of veterinary medicine. Affectionately called “Doc” he prac­ticed private veterinary medicine for 8 years in Sarcoxie and Joplin and then spent his remaining 22 years as a veterinar­ian for the US Dept of Agriculture, being deeply involved in the national hog cholera eradication program. He was a four year volunteer in devel­oping the one shot human anti-rabies vaccine.
Richard was an active member of South Ha­ven Baptist for 55 years, where he established many friendships. He was a member of the American Legion and a 32nd degree Mason. Friends and family will remember him for his great sense of humor and love for the outdoors. For many years, he and Molly enjoyed RV camp­ing with the Ozark Wan­derers and playing ca­nasta with a weekly card group. Doc embraced life to its fullest and will be greatly missed!
Services for Dr. Boyd will be held on Tuesday, January 19, 2016 at 9:30 am in South Haven Bap­tist Church, with visita­tion on Monday evening from 6 to 8 pm in Green­lawn Funeral Home South.