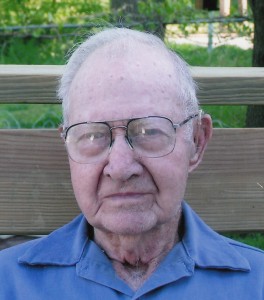 Richard Martin McDowell, 101, was born May 21, 1914, to William and Minnie (Dietzel) McDowell in Jefferson City, Mo., and died March 14, 2016.
Richard “Dick” worked in the Missouri State Capitol Building in 1935. During lunch hours, he watched Thomas Hart Benton paint murals in the House Lounge.
On May 7, 1939, he married Retha Barnard of Rogersvlle and they moved to Springfield. He completed a correspondence course to become an electrician and joined the IBEW Local 435 in 1941, later serving on thhe examining board. He worked several jobs as foreman, including: St. John’s Hospital, Parkview High School, Missouri State University, Associated Wholesale Grocers warehouse and Southwestern Bell telephone building. Richard retired from Roper Electric Compny in 1979 and later started Dick’s Sharpening Den-ideal work for a man who never met a stranger and liked to be on the go.
A longtime member of Central Christian Church, he served as Deacon and Cub Scout Master. He enjoyed traveling, camping, hunting, boating, was an avid fisherman and caught a 4 1/2 lb. bass on his 90 th birthday. His family was as special to him as he was to us, and we will miss his energy, enthusiasm, curiosity and love of life.
Richard was preceded in death by his parents; sisters, Mildred Fork and Margaret King: and brothers, Paul and Bill McDowell. He is survived by his wife Retha; daughter, Lee Ann Russell: granddaughters, Penny Russell and Peggy Russell, their husbands Barry Shaw and John Barnes; great-grandson, Eli Barnes; nieces, nephews and friends.
Funeral services will be held at 1:00 p.m. Friday, March 18, 2016, at Greenlawn Funeral Home North, 3506 North National, with visitation from noon till 1:00 p.m. before services. Burial will follow, in Panther Valley Cemetery, north of Rogersville.