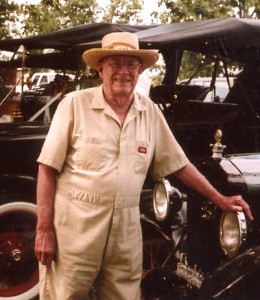 Robert F. Williams, 88, of Springfield passed away on April 9, 2015 at Manor Care, Springfield, MO. Mr. Williams graduated from Central High School entering into the military in May of 1944. Mr. Williams served in the U.S. Navy as ship’s cook 2nd class until June of 1946. Mr. Williams was a lifelong student attending Drury College in Springfield, Missouri. He joined City Utilities in 1950, working his way from storeroom clerk to General Manager, retiring in 1989 after 39 years of service. Mr. Williams was a member of Southside Baptist Church, was a Mason (Scottish Rites 50 years), Eastern Star serving Worthy Matron. As the owner of a 1926 Ford Model-T pickup, Mr. Williams was an avid exhibiter and participant in the Springfield Model – T Association.
Mr. Williams is preceded in death by wife, Stella Williams; father, John Williams; and mother, Treva Stratton.
He is survived by his daughter, Anna Williams Barksdale (William Craig); two grandsons, Robert L. James and wife Jessica, Andrew James and friend Audrey Bonds; great- grandchildren, Macy Claire, Brynlee James, and Emory James; a sister, Patricia June Williams; family/dear friend, Bob Hartsell; dearest family friend, Audrey Murray and her family; and many co-workers, employees, friends, and family.
Services will be April 20, 2015 at 11:00 a.m. in Missouri Veterans Cemetery with full military honors. Services are entrusted to Greenlawn Funeral Home South.
In lieu of flowers, donations to St. Jude’s Children’s Research Hospital are encouraged, the donation line is 1-800-805-5856.