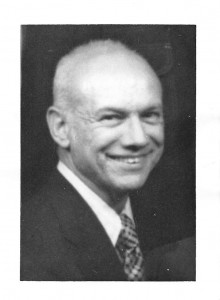 Robert Franklin Shrimpton was born December 18, 1922 in Independence, Missouri to Walter H. and Nettie A. Shrimpton. He passed away peacefully on July 17, 2015 in Ozark, Missouri. Bob, as friends knew him, grew up in Independence and graduated from William Crimson High School. He received his bachelor’s degree from Park College in Parkville, Missouri and his Masters in Religious Education from Southwestern Baptist Theological Seminary, Fort Worth, Texas in1949.
During Bob’s first ministry position in Chillicothe, Missouri he met and married the love of his life, M. Lucille Baxter on December 10,1950.
Bob’s faithful ministerial service spanned nearly 40 years. He served as the Minister of Education throughout his career in many Missouri Southern Baptist churches: Chillicothe 1949-1950; King Hill Baptist Church, St. Joseph 1951-1955; Hanley Road Baptist, Clayton 1955-1958; Monroe Avenue Baptist, Kansas City 1958-1962; Bethany Baptist, Kansas City 1962-1968; and Fee Fee Baptist in Bridgeton from 1968 until his retirement in 1987. After a brief hiatus, he returned to Fee Fee Baptist as the Lay Equipping Minister for an additional two years. Bob also served on the Missouri Baptist Executive Committee from 1977 to 1980.
He was preceded in death by his parents and three siblings: Florence Clark, Madge Shrimpton, and Walter Shrimpton. He is survived by Lucille, his beautiful bride of 64 years; his four children and their spouses: Linda and Ron Springate, Jefferson City, Tennessee; James and Rhonda Shrimpton, Kearney, Missouri; Stephen and Kelly Shrimpton, Springfield, Missouri; and Jon and Lisa Shrimpton, Grafton, Illinois; 10 grandchildren, and 8 great grandchildren.
Bob, also known as Dad, Daddy, Granddad and Granddaddy, left a rich spiritual legacy to his family and to those who knew him. He provided the Biblical model of loving Lucille as Christ loves the church. Bob loved his wife, loved his family, but most of all loved the Lord and dedicated his life to sharing the good news of God’s grace and redemption for all who would receive His gift of forgiveness and eternal life.
The family would like to thank CoxHealth Systems and the Baptist Home for the excellent care Bob received while at both locations. Cox South’s Emergency Room, SICU, Transitional Care Unit, and the Baptist Home staff all provided compassionate, outstanding, exceptional care.
A celebration of his life will take place in Springfield, Missouri at Greenlawn East Funeral Home on Friday, July 24,2015 at 4 pm. Visitation will be from 2-4 pm. Graveside services will be held at Wheeling Cemetery in Wheeling, Missouri on Saturday, July 25,2015 at 3 pm.
Memorial contributions may be made to The Baptist Home, 1625 West Garton Road, Ozark, MO. 65721.