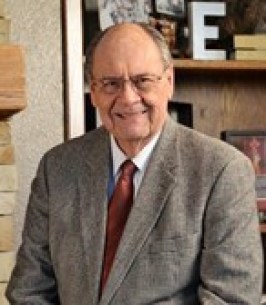 Robert Herman Spence, 84, passed into the presence of the Lord on Feb. 19, 2020 in Springfield, Mo. His was a life spent in service to his family, his church, his community, and to the students, faculty, and friends of Evangel University.

Dr. Spence was born on Sept. 13, 1935 in McComb, Miss., to T.H. and Lucille Spence. He grew up in Montgomery, Ala., and earned his undergraduate and graduate degrees from the University of Alabama.

An ordained minister, Dr. Spence held pastorates in three Assemblies of God churches throughout Alabama over the course of 20 years. He also taught in the Tuscaloosa, Alabama, public school system and served for three years as the principal of a junior high school. In addition, he served as a presbyter in the Alabama Assemblies of God District for seven years before beginning his time as a member of the Board of Directors of what was then Evangel College, in 1968.

Dr. Spence began his tenure at Evangel on May 1, 1974, and retired on April 30, 2014, serving for 40 years. At the time of his retirement he was the longest-tenured college president in the state of Missouri and the second-longest in the nation. In an interview conducted at that time he said, “This was my greatest opportunity—to work with young people in their formative years and prepare them for lives of achievement.”

During those years he oversaw the transition of the campus from its World War II beginnings into a fully completed university. Under his direction, enrollment doubled, Evangel gained university status, and ten master’s degree programs were added. Most importantly, he was part of the transformation of tens of thousands of students’ lives as they were nurtured and taught under his leadership.

He was a leader in other ways, as well—active in civic and community affairs and respected as an advisor. He served where needed, including positions as:

His awards and honors are extensive. Most recently, on Feb. 10, 2020, Dr. Spence was awarded the “Key to the City” by Springfield Mayor Ken McClure, honoring Dr. Spence’s many years of service. That time is now treasured by those in the community who were able to tell Dr. Spence personally what he has meant to them over the years, and express their thanks for his influence, not only in the community, but in so many lives.

In 2004, he was named Springfieldian of the Year by the Chamber of Commerce and received the Missourian Award, which acknowledges the most accomplished and recognized citizens of Missouri. He was also honored by the Springfield Business Journal with both the “Men of the Year” and the “Lifetime Achievement in Business” awards.

During his final three years at Evangel, Dr. Spence participated in the work leading to the approval of the consolidation of Evangel University, Central Bible College and the Assemblies of God Theological Seminary.

He was preceded in death by his parents; sister, Joanne Hart; and two children, Jennifer and Tom.

Cards to the family may be sent to Evangel University Office of the President at 1111 N. Glenstone Ave., Springfield, MO 65802.

In lieu of flowers, the family has requested contributions to the Robert H. Spence Evangel University Memorial Fund. The link: https://www.evangel.edu/drspence/

However, if you want to send flowers, please have them delivered to Greenlawn Funeral Home East, 3540 E. Seminole, Springfield Mo.