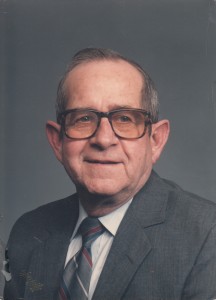 Robert Lee Brooks, age 89, of Springfield, MO, passed away Wednesday, January 7, 2015 at Mercy Hospital. He was born September 27, 1925, in Ava, MO, He was a member of the Pleasant Valley Church. He was a retired butcher. He served in the United States Army during W.W.II He was preceded in death by his wife of 52 years, Mary Brooks, his parents; Rea and Dora (Graham) Brooks, and a brother; Richard Brooks. Robert is survived by his 4 daughters and their husbands: Dianna and Jim Lewis, Donna and John Mitchell, Delores and Eugene Butler, and Darlene and Randy Riggs, 7-grandchildren, 18 great-grandchildren, and his special friend; Pat Eagon-White, his sisters: Gretchen Gilland, Sharon Sue Neumeyer, Jean Sanders. He also leaves behind his special pet Angel.
Funeral services will be held at 3:00 p.m., Monday, January 12, 2015, at Greenlawn Funeral Home North, Springfield, MO with officiating. Burial will be held in Greenlawn Memorial Gardens, Springfield, MO. Visitation will be held from 5 to 7p.m. on Sunday, January 11, 2015 at Greenlawn Funeral Home North. Memorial contributions may be made to the Southwest Mo, Humane Society. Services have been entrusted to Greenlawn Funeral Home North, Springfield, MO. Online condolences may be made at www.greenlawnfuneralhome.com.