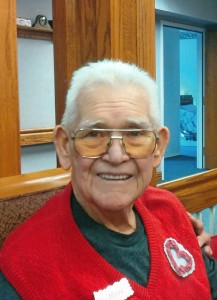 Robert (Bob) Lee Johnston, age 80, of Brookline, MO, passed away Tuesday, June 16, 2015 at Glendale Gardens. He was born March 21, 1935, in La Port, IN, to Loren and Ivy (Henshaw) Johnston. Bob graduated from Morrisville High School. He worked as a truck driver for General Cable for 20 years, he retired from Associated Grocers after 13 years of service. He was a member of the Teamsters Local 245. Bob was a big NASCAR and Dale Earnhardt fan, he enjoyed grilling and cooking for his family He was preceded in death by his wife of thirty-four years, Bobby Ann Johnston; parents, Loren Johnston and Ivy Johnston; and three brothers, Howard, Jerry, and Norman Johnston He is survived by his loving wife of twenty-five years, Rita Johnston, Brookline, MO; four children, Linda May, Springfield, Tom and Angela Johnston, St. Peters,Eric Robbins, Brookline, and Kevin and Heather Robbins, Springfield; six grandchildren, Megan and Brandon May, Kari Higgins, Briauna Johnston, McKenzie and Halle Robbins; two great grandchildren, Destiny May and Kaleb Massey; and a host of family and friends. Funeral services will be held at 10:30 a.m., Friday, June 19, 2015, at Greenlawn Funeral Home North, Springfield, MO with Rev. Frederick Zahn officiating. Burial will be held in White Chapel Memorial Gardens, Springfield, MO. Visitation will be held from 7-8:30 p.m. on Thursday, June 18, 2015 at Greenlawn Funeral Home North. Memorial contributions may be made to the American Heart Association. Services have been entrusted to Greenlawn Funeral Home North, Springfield, MO. The family would like to thank the staff at the Manor at Elfindale for the wonderful care and support they provided Bob and his family.