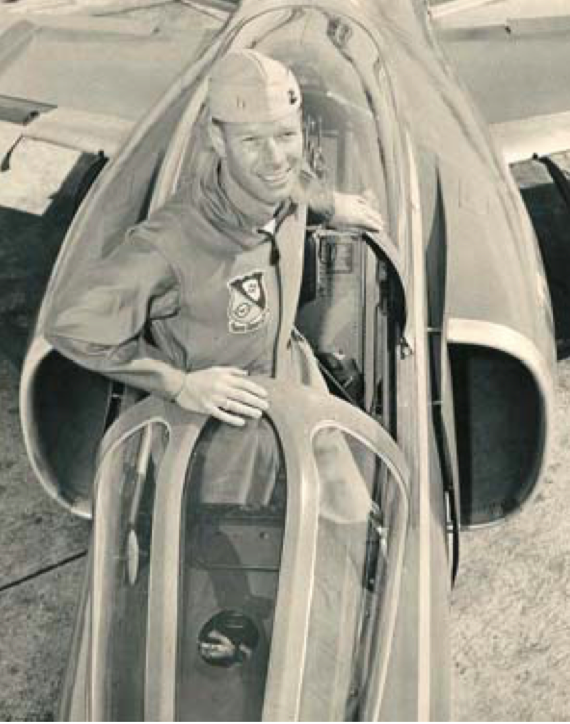 In the early morning of Friday January 3, 2020 Robert Stoney Mayock II peacefully flew his last flight. He slipped the surly bonds of earth, performed a perfect rendezvous, and joined up with his Heavenly Father and ultimate Flight Leader.

Stoney was born on December 21, 1929 in Hollywood California, the youngest son of Robert Stoney and Ann Mayock. Soon after, his father a renowned expert on fine food and wine moved the family to San Jose, where he purchased a vineyard and established Los Amigos Wines. Growing up in Fremont, Stoney attended Irvington Elementary and graduated Washington High School in 1947.

With the outbreak of the Korean War, Stoney enlisted in the Marine Corps. He deployed and participated in combat operations in 1951 and 1952 as an Infantryman. During one of his many firefights that devolved into hand to hand combat, Stoney was severely wounded in the head and face by an enemy grenade. After recovering in a field hospital, he returned to his unit and completed his tour. Following the war, Stoney successfully passed a college equivalency exam, completed Officer Candidate School, and was commissioned a Second Lieutenant in the Marine Corps. After the Basic School at Quantico Virginia, he was assigned to Pensacola Florida for flight training. There, he received his Wings of Gold in 1954. After serving as a squadron fighter pilot on the West Coast and in the Pacific, he was selected as a member of the U.S. Navy Flight Demonstration Squadron–the Blue Angels.

Flying with the Blues was an achievement he regarded as one of the greatest honors of his life. It most certainly defined him. Back in the day when it was okay to have “swashbuckle,” Stoney lived that trait proudly. During the 1958 and 1959 seasons Captain Robert S. Mayock, USMC, flew over 150 Airshows in the F-11 F Grumman Tiger as the “Number 2,” flying the right wing aircraft in awe inspiring aerial ballets and the fabled diamond formation. Stoney had the distinction of being the sixth Marine pilot to serve on the Blues. But he was the first Devil Dog to successfully complete the full two year tour.

He was subsequently assigned to a number of billets that included operational and experimental flying units and various professional military schools. Upon completion of the Marine Corps Command and Staff College in 1967, then-Major Mayock was assigned duty as a Marine Aircraft Group Safety Officer and Assistant Operation Officer in Chu Lai, Republic of Vietnam.

During his tour of duty in Vietnam he flew 201 combat missions in the F-4 Phantom and 29 combat missions in the F-9F-8T Cougar. On a rainy Christmas night 1967, Stoney undertook a “Hot Pad” mission to support a Marine Recon Team surrounded by a large enemy force in the DMZ. Under the direction of a TACA Tactical Air Controller (Airborne)—he descended his F-4 below the 1000 foot ceiling, decelerated under 250 knots, dropped his landing gear, and turned on his landing light, which enabled visible guidance by the Recon Marines but made him dangerously vulnerable to ground fire.

Stoney made a total of 8 separate bombing runs, dropping Napalm in close proximity to the Recon Team, which was successfully extracted. His comment on the episode later in life, was simply, “Hey, a Merry Christmas was had by all.” When Stoney returned stateside in 1968, he was promoted to the rank of Lieutenant Colonel. He finished his career as a Project Officer at the Naval Test Center, NAS Patuxent River, Maryland.

One of the programs he oversaw was the CIA-developed Fulton Skyhook Surface to Air Recovery System in which a downed pilot, CIA officer, or Special Operations soldier could be retrieved by a low-flying aircraft. The principle was simple: the retrievee climbed into a reinforced, one-piece hooded jumpsuit into which was sewn a heady harness. The harness was snapped onto a bungee-cord rope about 800 feet long which was attached to a helium-filled balloon floated from a tether. Then a plane equipped with outriggers and sweeper bars would come in low and slow—about 130 knots—snag the line below the balloon, and the snatchee would be reeled in and flown to safety.

In the earliest days, Skyhook snagged nothing but sandbags. Well, not just sandbags. Stoney was rumored to have personally tested the system a half dozen times before other ‘lab rats’ from Army Special Forces and Navy SEALs got a chance to ride it.

Taking no pause after retirement, Stoney ‘got right to it’ as a civilian. He started a real estate brokerage firm and was very successful in the lucrative California market. He worked as consultant for the JOBS Project-dedicated to assisting Veterans transition into civilian life. He was the concessions coordinator for the LA Olympics. Maintaining his currency and qualifications as an airline transport pilot, commercial glider pilot and certified flight instructor he worked as a technical consultant for motion pictures. Noteworthy during this time he was one of the stunt pilots for the 1970 film “Tora! Tora! Tora!”

In 1981 Stoney was paralyzed in a car accident. After 5 months of traction and several years of physical therapy he recovered fully and began training for Triathlons, Marathons and Duathlons. Between 1985 and 2001, as an “elite” athlete he competed in over 200 races in 23 countries including 10 Iron Man events. From 1989 to 1997 he was a member of the USA National Age Group team where he competed for and achieved “top 10” in the world status. It was during one of the Ironman Races he met his wife to be Judy.

In 1991 at age 62 Stoney joined an expedition to Mt. Everest. After two weeks of hiking in the thin Himalayan air he reached the 17,500-foot high base camp. One of the climbers there needed psychological support to make the final ascent and Stoney volunteered to stay at base camp for two weeks and support him. The same climber later was stranded in Everest’s “Death Zone” and it was Stoney who finally got him back to Kathmandu alive.

He belonged to and was active in a wide array of clubs and associations including The Explorers Club, Toastmasters International, the Quiet Birdmen, the Order of Daedalians, the Blue Angels Association, and the Benefactors Circle of the National Museum of Naval Aviation.

Stoney also contributed generously in time and philanthropically to countless charities and organizations over the span of his life. As if that was not enough, he started one on his own: The Blue Angel Foundation, which was first dedicated to supporting the scholarship of Blue Angel team members’ families and now one that supports all veterans.

Stoney was predeceased by his parents, his brother Douglas, and his wife Judy (June 1, 2019).
He is survived by his sister Sally, his daughter Kathleen Mayock, and his sons Patrick Mayock and Robert Stoney Mayock III. Barbara Mahoney, Stoney’s caregiver misses him dearly.

Stoney’s nine-decade run was all the more remarkable because he did it in the shadow of the Greatest Generation. Stoney was a part of the Silent Generation—the ones who kept quiet, worked hard, and got stuff done. The ones who fought in Korea and Vietnam and lived to see the fall of the Soviet Union and the end of the Cold War. It was a great run Stoney. Your light burned brightly. Your life spanned eleven decades. You served your country with honor. We will miss your sense of humor, your quick wit, your ready joke or story, your laughter, your knowing smile, your mentoring with wise counsel and most definitely your swashbuckle.

“So here’s a nickel on the grass to you my friend: to your spirit, enthusiasm, sacrifice, and courage, but most of all to your friendship. Yours is a dying breed and now that you are gone
the world is a far lesser place.”

Services will be held at 10:00 on Wednesday, February 5, 2020 at the Naval Air Station Pensacola Chapel with a burial service to follow at 11:00 AM at Barrancas National Cemetery, 1 Cemetery Road on Pensacola, FL. Please plan for up to 2 hours to go through security to get on the base.

Funeral arrangements are being coordinated by the WATERS & HIBBERT FUNERAL HOME.

In lieu of flowers, the family has requested donations be sent to the Blue Angels Foundation, POB 1945, Pensacola, FL, 32591. www.blueangelsfoundation.org