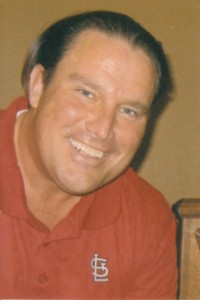 Robert Spencer Jackson “Spence”, 44, passed away March 27th, 2015 in Jefferson City, Mo. in his home. Spence was born on January 21st, 1971 in Springfield Missouri to Dana (Burks) Gray and Robert B. “Ike” Jackson. Spence spent his childhood and teens in Springfield.
Spence graduated in 1989 from Central High School. During high school Spence was a member of the business club and lettered in soccer.
Spence graduated in 1994 from Missouri State University with a Bachelor of Science (B.S.) degree in Communication. During college Spence was a dedicated and popular member of Pi Kappa Alpha fraternity and served as an officer during his junior year. During his college years Spence also developed a passion for politics while volunteering on David Steelman’s 1992 Attorney General Campaign.
After graduating from college Spence began his professional career with Walmart in their management training program. Following his tenure with Walmart Spence worked for Enterprise.
In 1997 Spence returned to his passion and began an extraordinarily successful career in public service as a Field Representative for Senator Kit Bond and Senator John Ashcroft. In 1999, Spence joined Matt Blunt’s campaign for Secretary of State later becoming Communications Director for Secretary Blunt. Spence was selected for the Leadership Missouri, class of 2003. Following Matt Blunt’s election as Governor in 2004, Spence was named Communications Director, Office of the Governor, a position he held until 2006. In 2007, Spence became Communications Director, Missouri Department of Economic Development. Additionally, he was Communications Director for Sarah Steelman’s 2008 gubernatorial campaign. He then returned to Missouri Department of Economic Development. In 2010 Spence was hired as Communications Director for Jordan Valley Community Health Center in Springfield until most recently joining the Missouri State Auditor’s Office in May of 2011 as Media Director, a position he held until his passing.
Spence was driven, hard-working, jolly and quick witted. His charisma, humorous personality and kindness made him popular and beloved by all. He was always the funniest man in the room and frequently the smartest. He possessed an uncanny ability to combine humor with persuasion. Spence had a unique ability to relate to and connect with people, regardless of color, creed, gender, socio-economic status or political affiliation. He was always positive and made everyone with whom he interacted happier and better. Spence knew no stranger. Spence was yearn from special cloth and will be truly missed.
Spence was preceded in death by his father, Ike, maternal and paternal grandparents, aunts Lila Tidwell and Shirley Wood, and uncles Joe Burks, Gary Burks and Jack Wood.
Spence is survived by his wonderful and loving mother Dana, sister Mandy and her husband Rodney and Mandy’s children Grant and Emily. Spence had recently connected with his half-brother, Nick, wife Michelle and their daughter Henley. He is also survived by his uncles Gene and Ed, aunts Ann, Sherry and Connie in addition to numerous cousins and their children.
Services will be held at Greenlawn Funeral Home East located at 3540 E. Seminole in Springfield. The Visitation will be held on Thursday April 9th, from 6 pm – 8pm. The Funeral will be held on Friday April 10th, at 1 pm. All services will be open to friends and family.
In lieu of flowers the family has designated the following Funds:
The Spence Jackson Family Fund for those wishing to send contributions for the family.
Please make checks payable to The Spence Jackson Family Fund and mail to:
Morgan Stanley, 1535 E. Primrose, Springfield, MO 65804.
The Spence Jackson Memorial Scholarship Fund at Missouri State University
Gifts can be made at the Missouri State University Foundation, 300 South Jefferson, Springfield, MO 65806.