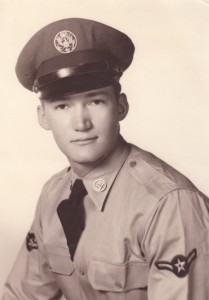 Rodney Allen Williams, age 82, of Springfield, MO, passed away Wednesday, May 6, 2015 at Maranatha Village. He was born February 14, 1933, in Lebanon, OH, to Giovanni and Freda ( Burnett) Williams . Rodney was a graduate of Baptist Bible College. He served in the United States Air Force during the Korean War. Rodney was united in marriage to Judith Ann Miller on September 10, 1967 in Springfield, Missouri. He was employed by Foremost Dairy for twenty-seven years. Rodney enjoyed spending time in the outdoors, fishing with his family and target shooting with his bow. Rodney enjoyed watching sports, he was an avid baseball fan, even trying out for the Cincinnati Reds. He loved to watch the St. Louis Cardinals. Rodney gave everything of himself to his family through hard work, self-sacrifice, and dedication

He was preceded in death by parents. He is survived by his loving wife of 48 years Judith (Judy) Ann Williams, Springfield, MO; six children, Vicki Whitworth and husband John, Danny Peavler and wife Bekki, Pam Letcher, Mark Williams and wife Jennifer, Debra Williams, David Williams and wife Emily; fourteen grandchildren; one great-grandchild; and a host of family and friends .
Funeral services will be held at 1:00 pm on Monday, May 11,2015, at Greenlawn Funeral Home North with Rev. Eddie Lyons officiating. Burial will be held in Greenlawn Memorial Gardens. Visitation will be held from 5-7 pm on Sunday, May 10, 2015 in the funeral home. Memorial contributions may be made to the M.S. Society. Services have been entrusted to Greenlawn Funeral Home North, Springfield, MO.