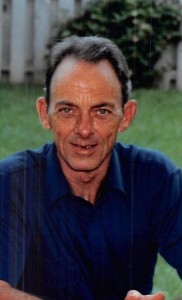 Ronald Lee Day, age 77, of Strafford, Missouri, passed away on July 4, 2016 with his family by his side. He was born in Springfield, Missouri on September 22, 1938 and was the seventh son and the twelfth child of Marshall D. and Edith C. (Austin) Day. Ronnie married Xiva Norine Nelson on January 1, 1960 and they had two children, Michael Lee and Suzan Elizabeth. He was an eighteen wheeler truck driver, driving for Campbell 66 for twenty years and Associated Wholesale Grocers for six years. He remained accident free for the twenty plus years that he was employed. He was a proud member of the Teamster Union, local 245. When he wasn’t working at his job, he was working at home. He enjoyed doing yardwork and is well known for keeping his yard in pristine condition at all times. He also enjoyed spending time camping and trail riding with family and friends. At the age of 50, Ronnie had a massive stroke, which left him partially paralyzed and unable to speak. He never regained his speech, but he eventually overcame some of his disabilities and was able to continue working in his beloved yard. Ronnie was not a member of a church, but was inspired by listening to the gospel on television every day. Ronnie was preceded in death by his parents, six brothers, Lester, Fletcher, Leonard (Ilene), Kenneth (Mary), Robert, Bert, and four sisters, Mildred (Owen) Andrews, Geraldine (Clarence) Willis, Ruth Peacock, and Doris Altaffer. He was also preceded in death by his mother-in-law Corliss Ervin and sister-in-law Wanda Day. Ronnie is survived by his wife of 56 years Xiva, son Michael Day (Jan), daughter Suzan Day, sister Arletta Phelps (Gerald), brother Larry Day, sister-in-law Barbara Day, brother-in-law Robert Nelson (Jan), and many nieces and nephews. And we must not forget his four-legged companions, Lizzie, Gracie, and grand dog Cilla, who loved him very much. Ronnie was a proud, meticulous, and hardworking man who loved and supported his family. We will miss him deeply, but are grateful that he is no longer suffering. We would like to thank Compasses Hospice, especially nurses Laura G., Laura J., and Mary Ann for their compassionate care the past eighteen months. Services will be held at Greenlawn North. Visitation is Thursday, July 7 from 6 to 8 pm. The funeral service is Friday, July 8 at 12 pm. Interment will be at Greenlawn Memorial Gardens.