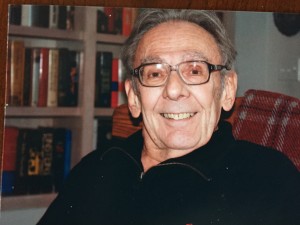 Ronald Edgar Miller went home to be with his eternal Lord and Savior April 26, 2015, surrounded by his two loving daughters, Sharon and Beverly, and his devoted wife, Ann. Ron was born January 6, 1938 to Viola (Bauer) and Harris Edgar Miller in Jersey City, New Jersey.

His early years were spent in Ridgefield and Saddle Brook, New Jersey and on Cape Hatteras (Avon) North Carolina. In 1955 he joined the Army to serve his country and see the world. While stationed at Fort Leonard Wood, he visited the Southeast Gospel Chapel where he met a minister’s daughter and future wife, Anna May Elliott. They married in 1960 upon his return from his post in Germany. They were blessed with two daughters.

While working for City Utilities, he earned a BS degree in Education and later, a Master’s degree in Education from Drury University. He inspired many students during his years as a history teacher at Glendale High School and later as a faculty member in teacher education at Drury University .
In 1972 he received the Jaycee’s Outstanding Young Educator Award. Ron spent his life studying and sharing his knowledge with others.

In 1984 he received his doctoral degree in curriculum and instruction from the University of Northern Colorado. He accepted a teaching position at Concord College in Athens, W. Va., and later at Missouri Valley College in Marshall, Missouri. He received the Governor’s Award for Excellence in Teaching in 1995. He was loved and respected by his many students.

One of Ron’s passions was performing magic. As a teenager and throughout life, he entertained children and adults with sleight of hand, stage tricks, and illusions. He captivated area audiences for many years at charitable functions and parties as Ron Miller, Master of Magic.

Ron also travelled the world and shared his adventures through his gifted photography and storytelling. He made numerous extended trips to France and was even enrolled in a prestigious language institute in Tours to ensure communication with his newly acquired French side of the family.

Appreciation is expressed to Dr. James Coulter who provided asthma care from 1975 until his retirement and Oxford Hospice.

Visitation will be 6-8 p.m. Tuesday, April 28 at Greenlawn South. Celebration of life will be at 2 p.m. Wednesday, April 29 at First and Calvary Presbyterian Church. Graveside services will follow at Hazelwood Cemetery. Memorial contributions may be made to Oxford Hospice. Online condolences may be made at www.greenlawnfuneralhome.com.