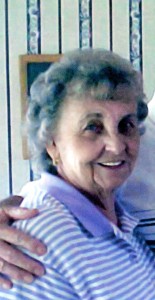 Rosalie Costello, 88, passed away November 21, 2014 at her home in Springfield, MO surrounded by her loving family after a long struggle with Alzheimer’s disease.
Rosalie was born on December 21, 1925 in St. Louis. MO to Edna (nee Duckworth) and Alfred Hilligoss. At the age of 16 she went to work at Southwestern Bell as a telephone operator, a position from which she retired in 1975.
She was united in marriage in 1950 to Thomas Joseph Costello and together they lived in Washington Park, Illinois until 1977 when they relocated to Branson, MO.
Rosalie was preceded in death by her son, James Thomas, and three brothers Jack Hilligoss, Robert Hilligoss and James Hilligoss.
She is survived by her husband, Thomas, a daughter, Nancy Austin and husband Brad of Ozark, one granddaughter, Stephanie England and husband Trent, four grandsons, David Austin, James Costello, Ryan Costello and Matthew Costello, a sister-in-law Katie Rembish and husband Adolph a special niece, Linda Crouch and husband David and many other beloved family and friends.
Rosalie will always be remembered for her sweet spirit and loving personality.
A rosary service will be held from 5:30pm to 6:00pm on Monday, November 24, 2014 with visitation to follow in Greenlawn Funeral Home South. Funeral Mass will be at 11:30 am on Tuesday, November 25, 2014 in Immaculate Conception Catholic Church.
In lieu of flowers, the family requests that contributions be made in her honor to Mercy Hospice of Springfield.