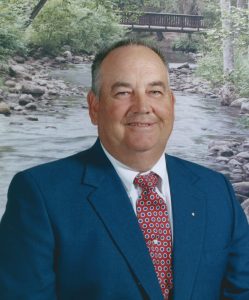 He is survived by his wife, Betty Blevins Johnson, of the home; a son, Christopher Dean Johnson, a lawyer in Wilmington, NC; a daughter, Dr. Monica Johnson Cayouette, and her husband, Dr. Scott Cayouette, of Charleston, SC; stepson, Dr. Doug Windly in Atlanta, GA; stepdaughter, Ms. Debbie Windly Olson of Branson, MO and Rich Olson of Frisco, TX; and his cherished grandson, Caleb Richard Cayouette, of Charleston, SC. Roy is survived by 3 siblings: Mrs. Carol Rockey and husband Francis of Knightdale, NC; Dr. Carl Johnson and wife Jo Ann of Boone, NC; and the Rev. Donald Johnson and wife Beth of Nashville, TN. Additionally, he is survived by several nieces, nephews, and hundreds of beloved students whom he cared for like his own family.
Dr. Johnson was born on February 25, 1943 to Glenne and Violet Hillhouse Johnson of Dugginsville, MO. He was a 1960 graduate of Gainesville High in Gainesville, MO. He attended Junior College at The School of the Ozarks and from there earned his Associate of Arts degree. After graduation, Roy served in the United States Navy from 1963-1965. Later, he went back to school and received a Bachelor of Science degree in Agriculture Education from Southwest Missouri State in 1966, an MS in Animal Husbandry in 1970 from University of Missouri, Columbia, and his Ph.D. in Animal Husbandry from the University of Missouri, Columbia in 1972. He taught at College of The Ozarks in the department of Agriculture for 38 years. Roy retired as Professor Emeritus in 2010.
Dr. Johnson was involved in numerous organizations over the years including Vice-President and Benefactor of College of the Ozarks Alumni Association, Southwest Missouri Beef Improvement Association, Taney County Cattleman’s Association (secretary for five years), Missouri Lions Club, Vice-Chairman of College of the Ozarks Faculty, President of the Missouri Hereford Association, American Society of Animal Science, Bobcat Booster Club, College of the Ozarks Aggie Club Assistant Advisor, Delta Tau Alpha (Agriculture Honor Society), Gamma Sigma Delta, Boy Scout Leader, and Gideons International where he served as Vice-President. He served in his Church at the College of the Ozarks as a Sunday School Teacher, deacon, and elder. He served his community in many other capacities too numerous to list, leaving a positive impact on all he encountered.
Memorial visitation will be Tuesday, August 16th, from 5-7 PM at Greenlawn Funeral Home in Branson. Memorial service will be held at the Williams Memorial Chapel, College of the Ozarks, on Wednesday, August 17th, 2016, at 1 PM. The family requests that memorial contributions be made in lieu of flowers to the Dr. Roy D. Johnson Beef Farm Scholarship fund at the College of The Ozarks or the Gideons International