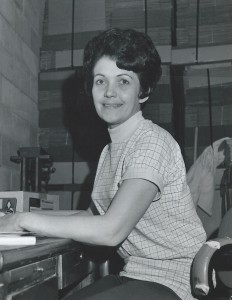 Graveside services for Ruby Dell Robertson age 85 of Ozark, Missouri will be held at 11:00 AM, Saturday, April 16, 2016 at the Prospect Cemetery near Ozark, Mo. with Pastor Joe Meadows officiating. Arrangements are under the direction of Greenlawn Funeral Home in Branson.
She passed away on April 13, 2016 at her home.
Ruby was born on May 22, 1930 in Donaldson, Arkansas the daughter of Clifford and Eugenia Blevins McCarter. She was a graduate of the Blue Eye High School, and retired after working for 37 years as a supervisor for the Avery Paper Company which made office and school supplies. She had been a resident of the Ozark area for the past twenty years. She loved working in her garden and her flowers. She was of the protestant faith.
Survivors are her two children: Lloyd Bucher (Christine) of Belvedere, Illinois and Kathy Tansor (Keith) of Arlington Heights, Illinois. Two brothers, Ralph McCarter of Whitsell, North Carolina and David McCarter of Ozark, Missouri. One sister, Barbara Base of Longtown, Oklahoma. Four grandchildren; Angie Turnbough (Justin), Kali Tansor, Paul Bucher and Adam Barnes. Four great grandchildren, Autumn, Trey, Hailey and Haven. Ruby was preceded in death by her parents, her husband, Lloyd Bucher, a brother, Ross McCarter, two sisters, Reva Allen and Connie Barnes and a granddaughter Kellie Bucher.
Visitation will be on Friday, April 15, 2016 from 6:00 until 8:00 PM in Greenlawn Funeral Home in Branson.