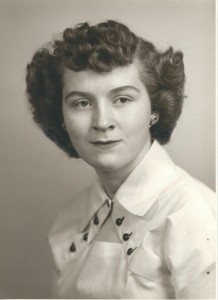 Ruth E. Williams, 80, of Springfield, Missouri passed away Sunday, June 26, 2016 in her home.
Ruth was born June 15, 1936 to Emil and Dora Choitz on a wheat farm in Ellsworth, Kansas. She was 1 of 12 children raised during hard times on the prairie.
At the age of 16 Ruth became a nurses’ aide in Ellsworth, where she lived at the hospital. On May 6, 1956 she married Jerry Williams, an airman in the United States Air Force. They soon moved to Missouri where they made their home and raised their family. She and Jerry have been members of Trinity Lutheran Church for 59 years. Ruth is described by family as a master gardener, fantastic cook, talented seamstress, thrifty at garage sales, and was the best Chinese Checker player around.
She was preceded in death by her parents and 5 brothers.
Ruth is survived by her husband of 60 years, Jerry, 3 children; Mike Williams and wife Robin of Clever, Missouri, Susan Shipley and husband Monte of Dora, Missouri and Sheri Abernathy of Battlefield, Missouri. She is also survived by 5 brothers, 1 sister, 5 grandchildren Ashleigh Yoder and husband Tim, Drew Dreckman and wife Jessi, Gina Volkmer and husband Paul, Alyson and Tyler Abernathy, and 3 great grandchildren Aspen and Willow Yoder and Drake Volkmer.
Graveside services for Ruth will be at 3:00 P.M. Tuesday, June 28, 2016 at Missouri Veterans Cemetery Springfield, Missouri under the care of Greenlawn Funeral Home East.
In lieu of flowers the family ask that contributions be made to Ruth’s favorite charity: Crosslines, 615 North Glenstone Avenue, Springfield, Missouri 65802.