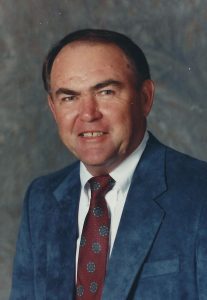 Samuel Judson “Jud” Lurvey, Jr, 77, of Nixa, MO passed away August 17, 2016.
Jud was born June 10, 1939 in Northview, MO to Samuel Judson, Sr. and Ruby (McQuerter) Lurvey.
He was raised in Northview, Mo and graduated from Marshfield High School with the class of 1957.
He did many things in his life such as builder, developer, businessman, rancher and cattleman.
He was involved in many business pursuits including being one of the founding directors and owners of Citizens National Bank, owner of Endless Summer Mfg, and Western Wardrobe. He was also Past President of the International Brangus Breeders Association.
Jud enjoyed traveling to the west, mostly to Arizona. He also loved western art, cattle farming, hard work and especially his family.
He was preceded in death by his parents and by his brother James “Jim” Lurvey.
Jud is survived by his son Jeff Lurvey, Nixa, Mo, his daughter, Lori Henderson and husband Steve, Bolivar; 5 grand children Baylee Henderson and fiancé Adam Hitchens, Columbia, MO, Lindsay Henderson, Kansas City, MO, Jordan Lurvey, Nixa, MO, Allie Lurvey, Springfield, MO and Shelby Henderson, Bolivar, MO. He is also survived by a sister Cara Hibbard, Harrah, OK and a brother Joe Lurvey and his wife Margaret, Springfield, MO along with faithful caregivers, Autumn Lurvey and Gloria Lurvey, Nixa, MO and also was Papa to Jessica Lurvey, Nixa, MO.
Services for “Jud” will be at 10:00 A.M. Saturday, August 20, 2016 at Greenlawn Funeral Home East with interment to follow at Welch Cemetery, Northview, Mo.
Visitation will be from 6:00 to 8:00 P.M. Friday, August 19, 2016 in the funeral Home.