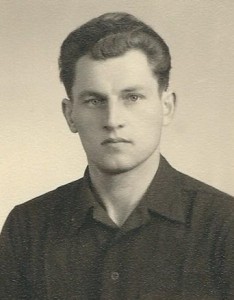 Serge Malas joined his wife Anna and son Eddie in The Lords House on his 94th birthday, Thursday, March 12th; 2015 at 1 :36 pm. Serge passed peacefully at Mercy Hospital, Spfld, Mo. He was born in Kaunas, Lithuania, on March iz”, 1921 to Vladimier and Olia Malaschitchevas. The last name was shortened to Malas as part of the proceedings, receiving American Citizenship in 1957. His early education taught him the skills he used throughout his life working as a Machinist, later owning his own shop, Malas Machine Shop, Spfld. Mo. During WWII Serge came to work for the American Army in the 56th Quarter Master Depot, Geissen, West Germany as a skilled Mechanic. His services there made him instrumental to the success of the US Army during the war. He even built a new 110ft flagpole for the Depot, which is still there today. He met and married Anna Dechert while in Germany and his oldest son, Eddie was born in Germany. After the War, he applied for American Citizenship and came to the US in 1950, sponsored by a wonderful family, the Spence Family, from Willow Springs, Mo. They have been as family, and treasured for all the years. Two other children Wayne and Rita were later born in Spfld. Mo., to Serge and Anna. Serge was a very talented man who could do not only Machinery, but Mechanics, Building, Plumbing, etc. and used his talents throughout his life for the betterment of his family. Also, always willing to help anyone in need. He was a man of many virtues; honesty, integrity, compassion, humility, just the start of a long list. He was a devoted and loving Husband and the best Father and Grandfather one could ever be blessed to have. He is preceded in death by his wife Anna, and son Eddie, also his birth parents in Lithuania, and two brothers and a nephew in Lithuania. Serge is survived by son Wayne Malas and wife Deborah, daughter Rita Malas Pinckney, grandchildren Tara Phillips, Christopher Malas and wife Tina, Michael Malas, Kristianna Pinckney, and Denver Pinckney.
Services will be from 6:00 to 7:00 P.M. Wednesday March 18, 2015 at Greenlawn Funeral Home East with visitation from 5:00 to 6:00 P.M. prior to service. Private interment will be at Greenlawn Memorial Gardens on Thursday. Donations can be made, helping animals, to the SAAF House Spay-Neuter Clinic, 1600 N. Washington, Springfield, MO. 65803 or CARE No Kill Animal Shelter, PO Box 215, Aurora, MO. 65605