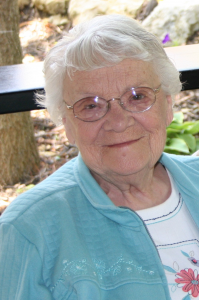 Shirley Miller, 89, passed peacefully on June 12th, 2015 surrounded by family and friends. She was born February 26th, 1926 in Toledo, Iowa to Gladys Smith Vavra and James Vavra. She was adopted and raised by Charles Armor, later graduating from Sacred Heart Covenant in St. Joseph, Mo.
Shirley married Raymond Miller in 1948 and together they worked for Moose Lodges throughout the Midwest. They moved to Branson in 1968 where she pursued her passion for the food and dining industry. In the 1970’s Shirley helped manage the Branson School’s Cafeterias. She was an active leader of the Missouri Restaurant Association and successfully managed many area restaurants. In her later years, Shirley enjoyed working alongside friends at Presleys’ Theatre.
She is survived by daughter Raeanne Presley and her husband Steve Presley, grandson Nick and his wife Rhianna, grandson John and his wife Ambrus, and granddaughter Sarah. Shirley also has four great-grandsons, Spencer, Jack, Henry and Hank.
If she wasn’t reading a favorite book, you could often find Shirley cooking one of her famous meals for family and friends. She especially enjoyed spending time with her best friend Barb Lancaster.
Visitation will be held at Greenlawn Funeral Home in Branson on Wednesday, June 17th at 3 pm, with a service following at 4 pm. In lieu of flowers, please give in honor of Shirley Miller to:
Taneyhills Community Library
200 South 4th Street
Branson, MO 65616
417-334-1418