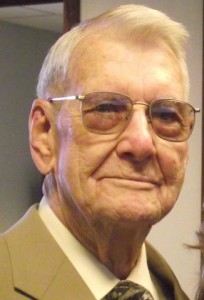 Stanley Lewis Ball was born October 28, 1917, in Nixa, Missouri and passed away on March 27, 2015, at the Neighborhoods at Quail Creek, Springfield, Missouri at the age of 97.
Stanley grew up in Nixa, and he graduated from Nixa High School in 1935. On March 22, 1939, in Galena, Missouri, he was married to Jo Elaine Halbrook. They were married sixty six years at the time of her passing in 2005. He was a World War II Veteran, serving from December 22, 1943 to October 8, 1945.
Sports were a major focus and influence in Stanley’s life. He played basketball for Nixa High School and was elected to the Nixa Schools Athletic Hall of fame in 1987. He refereed basketball for many of his adult years and played baseball on town teams both in Nixa and Branson. One of his greatest joys in his later years was attending Drury basketball games. He was a most dedicated fan and supporter of both the men’s and women’s teams.
Church was also important to Stanley. He was active in the Nixa Christian Church until the family moved to Branson, Missouri in 1955, and his membership was transferred to Branson Christian Church. He was an elder and headed numerous committees for his church.
As a young man, he drove a truck for Standard Oil Company, delivering all types of oil products on a rural route in Nixa and the surrounding area. In 1955, he purchased a half interest in a Standard Oil dealership in Branson. Later, he owned and operated an independent insurance agency in Branson, until his retirement in 1983.
Always active in his community, Stanley served on the Branson City Council for thirteen years, nine years as an alderman and four years as mayor. He was the recipient of The Gift of Time Award, Government Division, Springfield, in 1994, and was a past board member of both Nixa Bank and Empire Bank and was a director on the board of Central Trust Company at the time of his death.
Stanley was preceded in death by his wife, Elaine; parents, Frary and Sadie (Stricker) Ball; a brother, Glenn; and daughter Stana Vigil.
He is survived by his daughter, Jo (Tommy) Arcudia; grandchildren, Rick (Carol) Moore; Michael Vigil; Kristin Derrick; Amanda (Roger) Schaefer; Victoria (David) Stewart; seven great-grandchildren and many special friends.
The family would like to thank the staff of Good Shepherd Hospice and The Neighborhoods at Quail Creek for their loving care in Stanley’s final days.
Visitation will be Friday, April 3, 2015 from 1:00 p.m. to 2:00 p.m. at Greenlawn Funeral Home East, in Springfield, Missouri with the service beginning at 2:00 p.m. Burial will be in Richwood Cemetery in Ozark, Missouri.
In lieu of flowers, the family would request donations to the Boys and Girls Club, 1410 N. Fremont Avenue, Springfield, Missouri 65802.