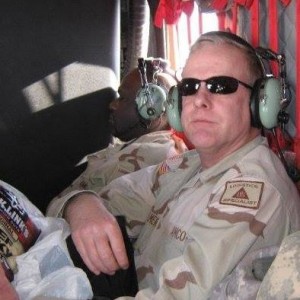 Stephen G. Palmer, age 53, passed away in Springfield, Missouri on 16 June 2016 following a short illness. Stephen was born in Indianapolis, Indiana and was a world traveler who lived in California, New Jersey, New York, Germany, Florida, Texas, and Oklahoma, before settling in Republic, Missouri. He served his country for more than 32 years as a Soldier, contractor, and federal employee and was deployed multiple times to Saudi Arabia, Bosnia, Kuwait, and Iraq. He most recently returned from his second Afghanistan tour in January.
Stephen died surrounded by his loving wife Trina; his daughters, Sonja and Stefanie; his father, Charles; and his sister and three brothers, Rebecca, Brian, Douglas, and Bradley. He was preceded in death by his mother, Priscilla, and is survived by his step-daughter, Aiyana.
Stephen was an incredibly hard-working man with a gentle and kind-hearted soul. He was committed to Army aviation and service to his country; he was a voracious reader; he enjoyed good comedy and funny movies; but most of all he loved and adored his family. He will be missed forever.
Graveside services will be on Friday, July 8, 2016 at 2:00 P.M. in Missouri Veterans Cemetery, Springfield, Missouri