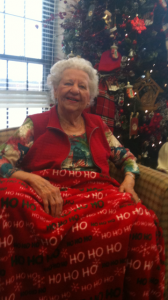 Sue Regina (Robb) Fulton, 95, died peacefully at Mercy Villa, Springfield, MO after a brief illness on March 24, 2015.
Sue was born December 2, 1919 in Des Moines, IA to James E. and Sylvia (Dutton) Robb. Sue resided in Des Moines and West Des Moines for most of her life and in Springfield, MO since 2007. Sue graduated from Roosevelt High School in 1938 and attended Drake University. On May 27, 1942 she married William (Bill) Henry Fulton in Des Moines.
Sue worked for Equitable of Iowa and later helped Bill in many aspects of his law practice. Sue and Bill enjoyed traveling and entertaining friends and family. She was an artist, creative cook, bridge player, avid reader and enjoyed working the daily crossword.
Sue was a member of the West Des Moines United Methodist Church, Plymouth Congregational Church and Kappa Kappa Gamma Sorority.
Survivors include: her children, Sally, Robb, Martha (Geo); granddaughter, Sarah; nieces and a nephew.She was preceded in death by Bill (2001), her brother Rich (2012), and her parents.
Private interments arranged by McLarens Resthaven Chapel and Cemetery in West Des Moines. Memorial contributions are suggested to a charity of the donor’s choice.