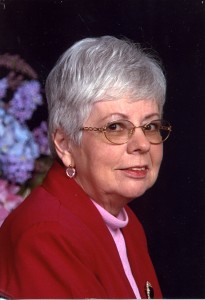 Margery Sue Ruckman of Branson, Missouri, formerly of Centerville, Iowa, passed away at the ageof 77at her home. Sue was born January 23, 1938 in Mount Ayr, Iowa, the daughter of Dennis and Alice (Elliott) Terwilliger.
Sue graduated from Mount Ayr High School in 1956. During her high school years she participated in vocal music, band, cheerleading, various organizations and played the piano for school activities. She also enjoyed working at the Princess Movie Theater four years while in high school. At the age of 12 sue invited God into her heart and was His faithful follower all her life. She played the piano and organ for Sunday School and church thru the years.
In 1955 Sue met Richard Ruckman of Shannon City, Iowa at the Mount Ayr skating rink and they were married November 18, 1956. They were privileged to celebrate their 50th wedding anniversary on a cruise to Hawaii with friends. To this union three children were born; Larry Dean, Chris Alan and Karen Elaine. The family first resided in Shannon City and were members of the Methodist Church from 1956 until moving to Centerville, Iowa in 1964. There Sue joined the First Baptist Church where she served on many boards, committees, sang in the choir and played the piano.
Sue worked in the Appanoose County Assessor’s Office in Centerville from 1974 to 1998. In June of 1998 the couple retired to Branson, Missouri. She became a charter member of the Friendly Baptist Church where again she shared her musical talents. Through the years she made precious memories by traveling with her husband, family and friends in 47 of the 50 states as well as several cruises. Sue enjoyed dancing, playing golf, playing the piano, sewing, crocheting afgans for family members, watching college basketball on tv and living in the Branson area. Above all she loved her family very much and they always came first in her life. Sue was preceded in death by her parents, her beloved husband Richard of 55 years in 2012 and her special son, Larry in Jun 2013.
Survivors include her son,Chris Ruckman of Centerville, Iowa, her daughter Karen Ruckman of LaPlata, Missouri and daughter-in-law, Peggy Ruckmanof Centerville, Iowa. Four grandchildren; Paul Ruckman and wife Jennifer of Keota, Iowa, Angela Brown and husband Jamie of Kansas City, Missouri, Becky Crowe and husband Maurice of Laplata, Missouri and Ryannan Ruckman of Shambough, Iowa. Six great grandchildren; Hayley and Dylan Ruckman, Danny and Brooklyn Brown and Taylor and Ellie Salstrand. Three step grandchildren; Gavin, Seth and Leah Crowe. One sister, Joan Noble and husband Rollin of Branson, Missouri and one sister-in-law, Donna Berdine of Creston, Iowa, a special nephew, Jerry Noble, wife Kim and their children, Cub, Carson and Maddie. Plus other nieces, a nephew and many relatives and friends.
Funeral Services will be held at 11:00 AM, Monday, March 16, 2015 at Friendly Baptist Church in Branson with Pastor Cardis Bryan and Pastor Monty Dunn officiating. Burial will be at Haines Cemetery in Centerville, Iowa, Tuesday, March 17, 2015 at 11:00 AM with Rev. Lloyd Johnston officiating.
Visitation will be held from 3:00 to 5:00 PM, Sunday, March 15, 2015 at Greenlawn Funeral Home in Branson.
In lieu of flowers memorials can be made to Friendly Baptist Church in Branson, Missouri.