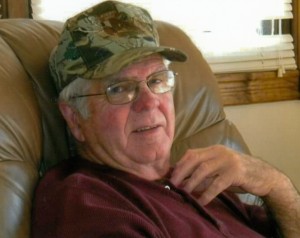 Teddy Lee Bodenhamer, 78, passed from this world Jan 1, 2016 at his Iowa home. Ted was born May 30, 1937 in Spfd, Mo to Fred and Alice Bodenhamer. He attended Spfd schools and graduated from Central High in 1955. He enlisted in the USAFR in 1954 and transferred into the USN in 1958 and served until 1962 then continued service in the USNR until 1967. Ted married Loretta Kay Bonat April 19, 1958 and to this union four children were born. He is survived by his daughter, Gina Raasch, son Chris, daughter Traci Albright (Chris), sister Karen Andrews, grandchildren; Brian Bodenhamer, Alicia Stokes, Nathan Stokes (LuAnne), Kendal Dotson, Brad Dotson, Jessica Bodenhamer and seven nieces and nephews. He was preceded in death by Loretta, his wife of 18 years, mother Alice, father Fred, son Bret and nephew Kevin Pretti. Ted was a carpenter by trade, loved his work and was picky about every detail. He will be remembered for his wonderful sense of humor and his kind and gentle ways. Graveside service will be held Jan 9, 10 am at Greenlawn Memorial Gardens. Visitation will be from 9-10am at Greenlawn Funeral Home North. Memorial donations may be made to the Alzheimer’s Assn.