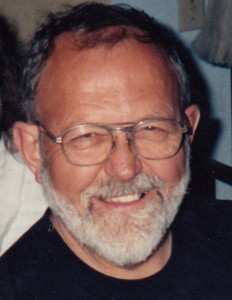 Ted Lee Rothermel, age 80, of Springfield, MO, passed away Tuesday, June 16, 2015 in his home. He was born May 3, 1935, in Springfield, MO, to Milton and Pearl (McKinnis) Rothermel. He was a graduate of Springfield Senior High School. Ted retired from French’s after over 30 years of service. Ted wanted to be a cowboy in his younger years, he competed in team roping and calf roping in local rodeos, he enjoyed hiking with the grandchildren, even taking them to the bottom of the Grand Canyon several times, camping with his family , visiting the national parks, spending time at the beach, and using his gift of carpentry to build a house, garage, pole barn and decks with his son. Ted’s greatest love was spending time with his family.
He was preceded in death by his parents,Milton A.V and Pearl Louise Rothermel; two sisters, Thelma Copeland and Patricia Calvin. He is survived by his loving wife of 28 years Juanita Rothermel, Springfield, MO; three children, Tammi Latham, Springfield,Tim and wife Shelly Rothermel, Springfield, and Julie and husband Robert Saeger, Nixa; step-son, William McClanahan, state of, LA; step-daughter,Autumn Summers, Springfield; 9 grandchildren; 11 great-grandchildren; one brother, John Rothermel, Springfield; one sister, Nancy Sloan, Springfield; and a host of family and friends.
Funeral services will be held at 10:00 a.m., Saturday, June 20, 2015, at Greenlawn Funeral Home North, Springfield. Burial will be held in Greenlawn Memorial Gardens, Springfield. Visitation will be held from 7-9 p.m. on Friday, June 19, 2015 at Greenlawn Funeral Home North. Memorial contributions may be made to the Special Olympics. Services have been entrusted to Greenlawn Funeral Home North, Springfield, MO.