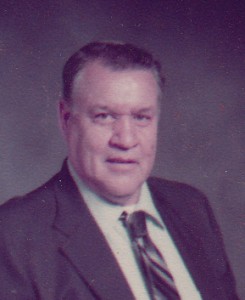 THOMAS H. “SCOTTY” SCOTT, 87
Long time Springfield, MO resident, Thomas Harmon “Scotty” Scott passed away at home on Thursday, January 29, 2015, taking one last flight to his final destination in Heaven at the age of 87 years, four weeks and 20 days.
He was born on December 12, 1927 in Welling, OK and was an enrolled native American citizen of the great Cherokee Nation.
In 1951, Scotty joined the United States Air Force, proudly serving his country as a flight crew chief for over 20 years. After tours of duty in the United States, Germany, Viet Nam and the Middle East he retired as a T/SGT in 1971.
He owned and operated an automotive repair business for many years, managed the Springfield Engine Supply Garage, and worked until 1991 as fleet manager for the local Pepsi-Cola Company.
Collecting and restoring automobiles, auto racing and watching sports were among his favorite interests. He was blessed with robust, lifelong strength and health prior to suffering a stroke in April, 2012. Scotty’s easy-going manner, friendly smile and zest for life will be greatly missed.
Preceding him in passing were his parents; one sister, Margaret; two brothers, Freeman and Robert; his first wife, Golda; and his daughter, Tammi.
Survivors include his wife of almost 35 years, Maxine of the home; one son, Thomas H., Jr, “Butch” (Wanda) Scott, Strafford, MO; one daughter, Pam (Dwight) Clamors, Walnut Shade, MO; one step-son, Bob (Rose) Upton, Holly Lake Ranch, TX; two step-daughters, Colleen Davis, Springfield, MO and Pam (Tom) Forrest, Niangua, MO; one sister, Susie Holt, Tahlequah, OK; one brother, Isaac (Bobbie) Christie, Welling, OK; 16 grandchildren; numerous great-grandchildren; other relatives; and many friends.
The family wishes to extend their gratitude to Integrity Hospice and Palliative Care for their support in his final days.
A visitation will be held from 5:00-7:00 p.m. on Monday, February 2, 2015 at Greenlawn Funeral Home North in Springfield.
A Christian funeral service will be held at 10:00 a.m. on Tuesday, February 3 at the same location with Loyd J. Ice officiating. Bryon Scott, Joshua Clamors, Tyler Scott, Orville Choate, Jr., Pete Choate and Randy Choate will be the pallbearers.
Interment with full military honors will be at 2: oo pm at Missouri Veteran’s Cemetery at the direction of Greenlawn Funeral Home North.